PSN Lets You Decide What Games Are Going On Sale 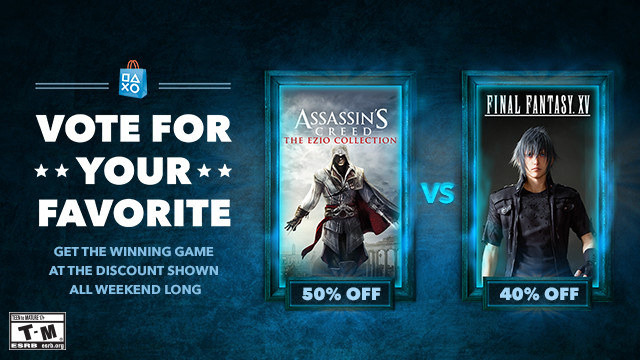 ​
Not unlike when Sony allowed fans to vote for a PlayStation Plus game, the company has announced a new initiative in the US where you can help decide which games are discounted on the PlayStation Store. A vote will take place on the PlayStation Blog each week over the next month, letting readers voice their support for one of two games. The first of these is already underway, pitting Final Fantasy XV against Assassin's Creed: The Ezio Collection.

Voting continues until tomorrow, March 1, with the winner set to be announced this Friday, March 3. One of the two games will then go on sale for the weekend, which will see the price of Final Fantasy XV drop to $36 or The Ezio Collection to $30. Subsequent votes will start on the Monday of each week over the next month. This campaign is based on one that's been run by Sony in other regions.