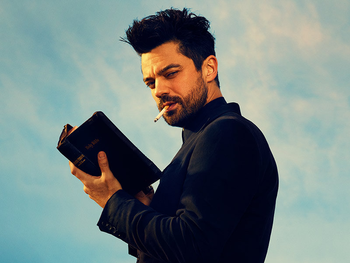 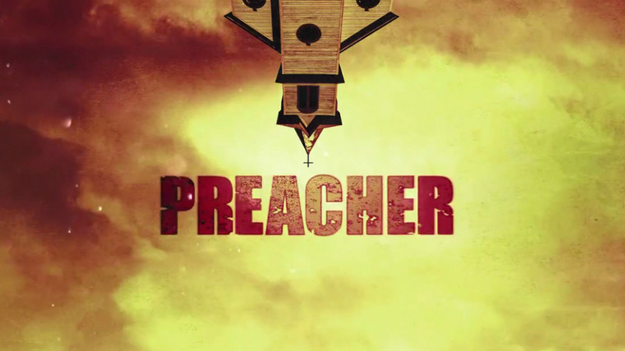 ​
I wanted to try something a bit different this time and review a show that just came out. Everyone is in the same boat, some have watched it, many haven't, but overall, it's brand new. I'll be avoiding spoilers for this sake and hopefully, manage to garner some attention towards this show and possibly gather some viewers and followers of it. If it goes well and people end up watching and enjoying the show and want to see it continuously reviewed, I'll do so; I'd appreciate your thoughts on the matter if you please. With that aside, on to the review.

Ok, first things first, this show is crazy, balls-to-the-wall insane, and I love it. It's one of my favorite "genres" of entertainment. It's ultra-violent, super gory, and its humor is dark and most definitely an acquired taste. It really combines a lot of genres, drama, comedy, action, thriller, to name a few. Preacher is honestly something difficult to effectively describe to someone who is unfamiliar with it, without spoiling key aspects of it. Incredibly outlandish and bizarre, and not for the faint of heart, to say the least.

Its protagonist is (as you may have guessed it) a preacher, named Jesse Custer, and he's played by Dominic Cooper. Preacher takes place in a small, conservative town in Texas whose inhabitants are very old-fashioned I suppose. They go to church every Sunday and drink and cuss on the other six days of the week. I'm quite fond of the main character right now really, he's a preacher who smokes and drinks (a lot) and has a bit of an interesting past, though it's not thoroughly explained yet, all we know is, he can beat the hell out of people if he deems it necessary.

We were introduced to two other main characters in its pilot, one of which is Cassidy, an alcoholic, Irish, Vampire. This guy is incredibly entertaining and arguably the main cause of a lot of the blood and gore found in the show, understandably, after all, he's a vampire. I really like this character as well, he always grabs your attention whenever he's on screen and he's just a blast to watch. A lot of the dark humor revolves around this guy and I enjoy it, it's got a Deadpool sense of humor here, so I can't help it really. The other main character is Tulip, and her debut is something to see. I can't say too much without spoiling it, really. Though, she does apparently share a past with Jesse, one he's reluctant to be a part of once again. She's an interesting character, I don't quite like her as much as the other two, though, I guess she feels a bit cliche to me.

Preacher has a unique pace to it, as well as its technique in shifting scenes. It's rather abrupt and slightly unexpected, kinda resembling a comic book, (which it's based off) again, it is an acquired taste. It can be somewhat hard to follow if you're not fully invested in it and giving it your full attention, which is understandably, offputting for some. I myself, don't mind it really. In every sense, this show feels quite refreshing to me. Frankly, I like it.

Overall, I (and others) have no idea where Preacher's story is heading, it's left very open. This show seems to be love-or-hate for people so far, I'm really liking it, though. It's dark, twisted, violent, and hilarious. What's not to love about that? I'm certainly going to be sticking with it, for a while at least. I'm looking forward to next week's episode and seeing how its story progresses throughout the season. At the end of it all, you're left thinking "What the hell did I just watch?" Personally, I like that feeling. It's something different and fresh feeling. I was not disappointed at all.

Do you think you'll give this show a shot? Have you already, and if so, what did you think? Would you like this to be a recurring review as well? Let us know below!
About author