Pre-Xbox One Headsets Will Work With An Adapter

Xbox Support has recently announced on Twitter that the pre-Xbox One headsets will work with the new console this November, this is good news for gamers with headsets that are quite expensive.​
​
Not a lot is known about this adapter solution but take note, the Tweet only mentioned wired headsets. Microsoft have stated in recent weeks that due to the new architecture of the Xbox One, all previous wireless solutions won't work with the new console due out this November.​
​ 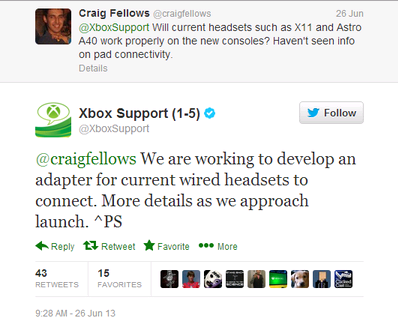 ​
It was believed that Microsoft had dropped support for the older headsets by incorporating a new microphone jack, which is said to improve data transfer between the controller and the console for upcoming peripherals. So far it is unknown whether the adapter itself will be sold at retail or if it will come packaged with the Xbox One.

It has been no secret that Microsoft have been making some rather questionable policies and then falling back on them, DRM being one of them.


I am quite relieved about this personally; it seems our headsets aren't going to waste. What are your thoughts about this? Should Microsoft have swapped out the friendly 2.5mm jack for the new data port? Please share your comments below.
About author