​
Oh, Pokemon, what glorious times we’ve had together. From my Game Boy Color and Yellow version, to White version on the DS I. Good times we’ve had. So, naturally, like many Pokemon fans, I was quite excited when I heard the announcement for Pokemon X and Y. As more and more news leaked, and the release date grew closer, I could barely contain my excitement. Now, after getting my talons around Y version, and spending 50 odd hours lost in its world, it’s time to share my experience with others. So, let’s do that.

Firstly, we’ll take a whack at the story. I’ll do my best to keep out spoilers, but if I slip one in by mistake, then I’m sorry. Anyway, our adventure begins per usual with an introduction by the region’s Pokemon professor, and the standard “are you a boy, or a girl” and “what’s your name” questions. After that, you’re thrust into the lands of Kalos, ready and eager to begin your adventure. After changing out of your pajamas and heading downstairs, you’re informed that Professor Sycamore is looking to meet you, and several other trainers. After you walk outside, you’re introduced to some faces you’ll be seeing frequently in your travels, your friends. Now, I know both Black and White games had something similar to this, presenting you two rivals to interact with during your journey, but I really like how they approached this for X and Y. Veterans of the Pokemon series are surely familiar with the loneliness these games tend to provide. Yes, you’re given a grand adventure, and meet many friendly faces along the way, but the closest thing to a friend is your rival, and there really isn’t much there. With this, you get 4 friends, each with their own goals as trainers. One of the best things about this is they didn’t overdo interactions with the group. You meet up with them at several points, and they provide help during the game, but you don’t see them so often it gets annoying. 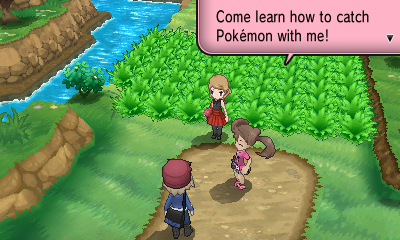 ​
Moving on with the story, you and your friends find a nice spot to sit, and you’re given the option to choose your first Pokemon. These are Chespin, Froakie, and Fennekin. For this game, your starters have an interesting choice for their dual types. The first and second evolutions of each starter are your standard Grass, Water, and fire. However, their last evolutions make them dual types, Grass Fighting, Water Dark, and Fire Psychic respectively. This gives each starter quite a bit more flexibility, though it makes them doubly weak to the other. Now, let’s move onto the designs of this generations starters. Personally, I think both Froakie and Fennekin have interesting designs, and good looking evolutions. However, while I like Chespin, I dislike the design choices for his evolutions. That’s just my opinion, though. Anyway, after choosing your starter, your main rival (i.e. the girl if you chose a boy, or the boy if you chose a girl), will choose the starter most effective against yours, per usual, and one of your other friends will take what’s left. After the standard rival battle, you’re off to find Professor Sycamore, and do trainer things.​
​ 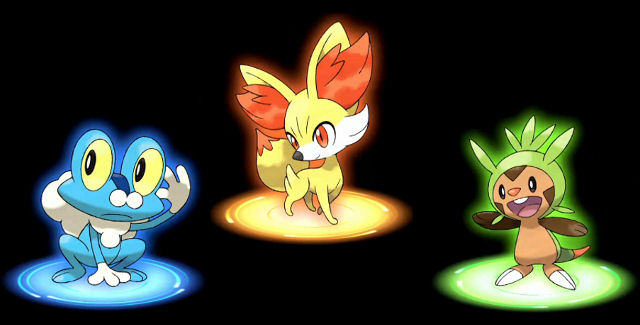 ​
Now, for the sake of not making this article overly long, I’m not going to get much more into the story, however, I would like to bring up the evil team in this game, Team Flare. I find Team Flare to be one of the more interesting teams in the series, if not just for their goal of wiping out all life on the planet other than themselves. I really find them funny, despite the tedium that comes with walking through numerous team grunts in certain areas. Most of them have fairly amusing comments, and the personalities of the team leaders are interesting, in my opinion.​
​
So, now, let’s take a look at the region of Kalos, and the gameplay that X and Y provide. So far, Kalos has been one of my favorite regions to explore. Unlike other entries in the Pokemon series, for most of the game, you’re not required to use most of the HMs you receive. However, and I consider this to be a clever move, if you want to explore all of Kalos, you’ll need them. Nearly every route in the game has small areas hidden behind puzzles (often pushing boulders around), and really give those looking to explore the region something to look forward too. Often you’ll get a TM, or another hard to find item as your reward for straying off the path. Speaking of exploration, I’d like to say that Game Freak did quite a good job of varying the paths and routes throughout the game. There are quite a few areas with special ways to traverse, such as jumping on rocks, or even riding a Pokemon to clear obstacles out of your way. This makes traveling a lot more interesting, and certainly, more memorable.

​
At this point, you’re probably saying “that’s great and all, but what about the battles”? I’m glad you asked. The battles for this game are very well done. For the few who may not know this, battles are in full 3D, no more 2D sprites for us! Each Pokemon is very well represented with their new 3D bodies, with well done animations for both the Pokemon themselves, and their attacks. Depending on where you battle, you get cool 3D environments as well, which really was a plus for me.​

Lastly, I’d like to address 3 of the biggest additions to the game. Mega Evolutions, Pokemon-Amie, and Super Training. Mega Evolutions where one of the biggest features advertised for this game. Certain Pokemon can now evolve to a more powerful form during battle, which leads to a more interesting way to fight. Only one Pokemon can Mega Evolve during battle (or at least only one can be Mega Evolved at a time), which really makes you stop and think about who should get that power boost. It really adds a new layer of strategy to the game. With that out of the way, let’s look at the two mini-games added to help raise your Pokemon, Pokemon-Amie and Super Training. Pokemon-Amie provides several games to let you raise your Pokemons’ happiness (among other things). While you may think this sounds silly, there are benefits to doing this. For example, a Pokemon with max happiness will sometimes survive hits that would normally K/O them, just so they won’t disappoint you. As for Super Training, this gives you a new way to EV train your team through different mini-games. This so may seem like a silly addition, but putting some time into it can provide some worthwhile results to your Pokemon’s stats.

So, now, after all these positives I’ve mentioned, let’s look at some of the negative aspects of the game. Firstly, let’s address the game being “too easy”. I’ve seen quite a few people complaining about this, and at first, I didn’t agree with it. At one point in the game, I was getting my *** handed to me. Then, I realized that I had an ill-balanced team, which was the true cause behind it. After catching and raising a good team, I started blowing through the game. Even the Elite 4 and Champion felt like pushovers. Many people could argue that a good team would make any game to easy, but raising your Pokemon to be powerhouses feels easier than ever, so I’ll just end with that point. Secondly, I’d like to talk about the post game. I’ll be honest, X and Y’s post game feels incredibly lacking. Within a few hours after the game’s ending, I had caught both Mewtwo, and Zygarde, and with a few more hours, I caught my Articuno. Other than train fill my Pokedex, there really isn’t much to do. There are some small things I missed, like the cafe battles, as well as raising your Pokemon’s happiness, and breeding of course, but that’s not really what I can call post game content. You could of spent time doing that at just about any point, really. Other than a few minor glitches, and these gripes I have, I think the game is well done, and certainly worth picking up by hardcore fans, or those looking to get into the series. So, have fun, and feel free to comment with your opinions below.