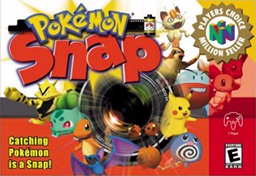 Pokemon Snap, the beloved N64 Pokemon photography spinoff, will be available on the Wii U Virtual Console in North America beginning tomorrow, January 5. It was made available in Europe in August and Japan in April.

This North American release comes on the heels of bestseller Pokemon Sun and Moon's Poke Finder camera feature, which works similarly to Pokemon Snap. With Poke Finder, you can take photos of Pokemon in specific areas and "upload" them to get NPC likes and comments.

In Pokemon Snap, you go on a safari to take pictures of Pokemon. You then send the photos to Professor Oak, who judges them based on things like size and number of Pokemon in the photo.

Pokemon Snap was also available on the Wii Virtual Console. If you already own Pokemon Snap on Wii, you can play it on Wii U without buying it again using the backward-compatible Wii Menu application.

Unlike the Wii version, the Wii U version of Pokemon Snap supports the GamePad and Pro Controller. Pokemon Snap on Wii U will cost $10.