Pokemon & It's Evolution Through The Ages Part 2

​
After Pokemon, Ruby Sapphire, and Emerald where released they became an instant hit, and still, to this day they are still considered one of the best generations of Pokemon games to date. But what about the rest of the series? What came after?

In 2006 Japan started the fourth generation of Pokemon games, Diamond, Pearl, Platinum, Heartgold, SoulSilver(Gold & Silver remakes) and finally Black and White. Diamond and Pearl where the first Pokemon games for the Nintendo DS. The fourth generations of games brought a lot to the table, the mixture of 3d graphics and sprites and the New Sinnoh region plus as you probably already guessed more Pokemon! 107 new species of Pokemon to be exact starting at Turtwig and ending with our lord and savior Arceus!

After the Sinnoh region the remakes of Pokemon Gold and Silver were released, I'm not going to go into them since I talked about the originals in part one.

Now it's January 29th, 2010 and Junichi Masuda has showed us a mysterious image on Pokemon Sunday.

This image was said to be revealed in the March 2010 issue of CoroCoro. This image was a sneak preview of one of the new generation 5 pokemon Zoroark(right) Corocoro has also reviewed his pre-evolution Zorua(left) 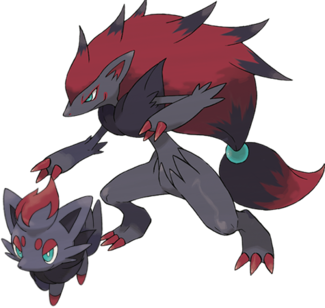 This all led up to the reveal of the fifth generation games, Pokemon Black and White, which where announced on May 29th 2010 and were set to release in the fall of 2010.

This generation added the new Unova Region and 156 new Pokemon starting with Victini and ending with Genesect, the only difference this time around is that Victini is actually #0 in the Pokedex.

Now it's January 8th 2013 and Satoru Iwata has announced the first fully rendered 3d handheld Pokemon games, however only select parts of the game can be displayed in stereoscopic 3D. These game where named Pokemon X and Pokemon Y and were set to release on October 12th 2013.

Pokemon X and Y even introduced 2 new and exciting mechanics that have never been done before in the series, ride able Pokemon (Gogoat and Rhyhorn) , customization of your character, mega-evolution, a new type (fairy) and for the first time since Pokemon Gold and Silver a new Eevee evolution Sylveon which will be a fairy type.

Pokemon X and Y even added 69 new Pokemon bringing the Pokedex up to a whopping 718 Pokemon!

What generation do you find did the most and which one did you like the best?