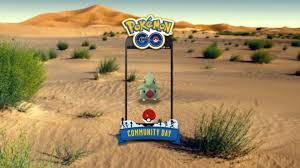 May's Pokemon Go Community Day may be over, but Niantic has already announced details for next month's event. The sixth Community Day will take place on Saturday, June 16, and it'll feature the rare Rock-type Pokemon Larvitar.

During the event, Larvitar will appear in much greater numbers than usual. Judging by the past few Community Days, players will need to evolve it into a Tyranitar before the event ends in order to learn a rare attack, although what move that will be remains to be seen; Niantic doesn't typically announce a Community Day's exclusive attack until just prior to the event.

In addition to increased Larvitar spawns, players will be able to earn extra XP by participating in the Community Day. During the event hours, players will receive triple the normal amount of XP for capturing Pokemon. Additionally, any Lure Modules that are activated during the event will last for three hours, as opposed to their usual 30 minutes.

As before, the Community Day will only run during a specific three-hour window, which begins at different times depending on what part of the world you live in. You can find the scheduled hours for each region below:

The Community Day isn't the only real-world event taking place next month. Niantic is kicking off the Pokemon Go Summer Tour 2018 on June 30 with a Safari Zone event in Dortmund, Germany. That will be followed in July by the second Pokemon Go Fest event in Chicago, with a special Safari Zone event planned for Yokosuka later this summer.

In other news, Niantic recently announced that Alolan forms of Gen 1 Pokemon will soon begin appearing in Pokemon Go. The Legendary bird Ho-Oh is also available again in Raid Battles until June 7, giving players another opportunity to capture it. Meanwhile, the Eon Pokemon Latios and Latias are scheduled to leave the game on June 5.