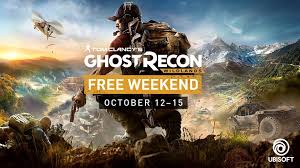 If you're interested in the open-world shooter Tom Clancy's Ghost Recon: Wildlands but haven't picked it up yet, we have some good news: You'll get a chance to try the game for free this weekend. The free-play weekend runs April 12 through 15, on PS4, Xbox One, and PC.

It's a good weekend to hop in, too. This week sees the launch of Wildlands' first big Year 2 update. It's called Special Operation I, and as Ubisoft just announced, it features a mission with Splinter Cell's Sam Fisher. Unlike in Blacklist, the previous Splinter Cell game, Fisher is once again voiced by Michael Ironside.

Ghost Recon Wildlands takes place in Bolivia, where the drug war is in full swing. You and up to three others play as a special forces unit tasked with going in and dismantling the cartel's operations. Your job is to topple one drug lord lieutenant at a time until you reach the kingpin El Sueno.

In GameSpot's Ghost Recon: Wildlands review, Miguel Concepcion wrote, "As only the second open world game in the Clancyverse, Ghost Recon: Wildlands is a middlingly safe tactical shooter and a slightly wasted opportunity given the ambitious scope of its seemingly boundless map. While its main strength is its mission diversity, it doesn't take long to lose the motivation after reaching El Sueno's doorstep. Even with a foursome of highly trained friends, Wildlands eventually reveals its diminishing returns. The feeling of positive immediacy and dopamine hits begin to wane sooner than you expected from a game with such a large and diverse world."

It's worth noting Ubisoft has released a number of updates and for Wildlands since the review was published, including a PvP mode called Ghost War. Ubisoft also announced last week that all Year 2 content would be free for all players. So it's probably worth trying out if you're looking for something to play this weekend.