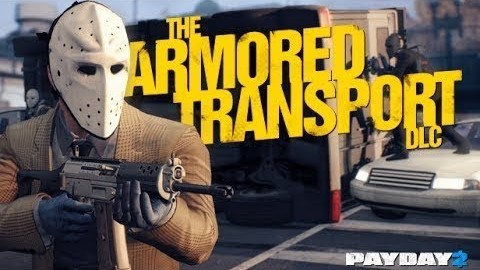 ​
If you really enjoying the crime-spree FPS Payday 2, then you will be pleased to know that a new DLC has been released on PC and has also been planned for console launch. The new DLC dubbed "Armored Transport" will add two brand new heists, weapons, masks and achievements.​
​
Armored Transport will allow players to choose between 5 different locations to rob an Armored Truck in which carries a good amount of loot for you and your partners. The goal will be to hit the trucks as fast as possible, kill any thing that stands in your way and haul out of there with the cash. Core mechanics will be the same as of robbing, but will be contrasting on the different maps you play on. The help you in your grand scheme, you will be getting the Commando 553 assault rifle, Gruber Kurz pistol and the Swedish K submachine gun along with masks of Presidents Obama, Nixon, Bush and Clinton (yes you read that right). You can get a special mask called "Hockey Heat" if you join Payday 2's steam group. You can get the full details here​
.

​
Here is something really interesting though: If you own the DLC and are hosting, then anyone can play it. Keep in mind that you won't have any access to any of the weapons or masks.​
​
Armored Transport is now on Steam $6.99 and will arrive for Xbox 360 and PlayStation 3 at a later date.​
​
Check out the trailer:​
​
​
​