Overdosed: A Trip To Hell 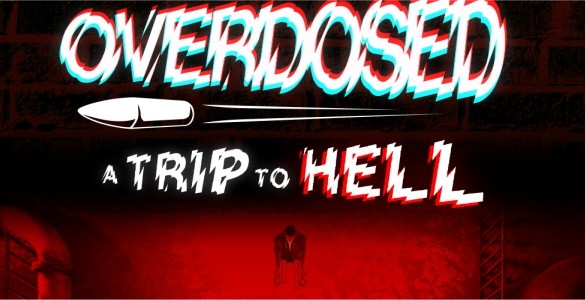 Welcome to Overdosed: A Trip To Hell. A brand new top-down shooter developed by Lazy Games. It features over the top, uber-violent action, drugs, roguelike elements, and all around fast-paced fun. The game is designed to keep you on your toes, with supplies being extremely limited and randomly generated. You'll need to play it smart and safe in your want to survive in the hellish world.

The game begins with you taking a potent dose of LSD, causing you to come under intense hallucinations. Judging from the trailer, the game features some intense, face-paced combat, with a heavy amount of jump scares on the side. Enemies will surround you from all sides, and the game includes dark corridors where enemies pop out of nowhere. This game most likely isn’t for the faint of heart. Your instincts and trigger finger will need to be extremely fast in order for you to survive.

You’ll be able to battle terrifying creatures that seem to come from your darkest nightmares, the world around you is randomly generated with arena style levels. Your goal is to keep running and shoot at anything that comes your way, whether it be with your trusty Uzi, or the devastating flamethrower. Overdosed is heavily inspired by top-down, ultra-violent shooters like Hotline Miami. The developers have aimed to take the elements from those type of games, and give their own little personal twist on them to make the gameplay more intense. The game is extremely fast-paced, so you’ll be running as fast as you can looking for the next cash pile, ammo, and more drugs while fleeing the horrifying terrors chasing you down. 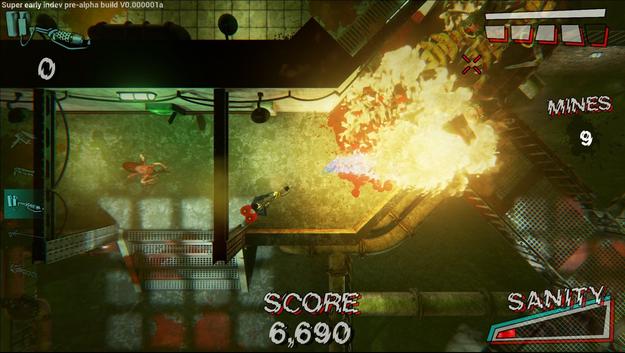 The developers claim the best part of the game is their Adventure mode which contains roguelike elements. The main goal of Adventure mode is to make your way through five stages which are randomly generated. Each stage will come with a unique set of objectives for the player to complete, and all of the objectives given to you need to be completed in order for you to advance. All in-game pickups such as ammo, extra drugs, and cash will spawn in random places, and each level will be different every single time you play. So if you screw up and die, you won’t be able to go back and easily fix your mistake. You’ll have to solve problems on-the-go, instead of solving them after you’ve messed up.

Keep in mind that every enemy you face is different. Each one will have a different attribute, and will attack you in a different way compared to another enemy. Some weapons are more effective on certain enemies compared to other ones. Enemies won't always try to attack you head-on as well. If certain areas are crowded, they will try to flank you and surround you from all sides, making your chances of escape seem extremely dim.

Last but not least, if you want to prove you're the best at Overdosed, the game will feature an online leaderboards system, which will track what your highest wave was on each level. Every level and theme for each difficulty setting will have its own leaderboard to display who is truly the best players in the world. If you play Adventure mode, the leaderboard will display how long it took you to reach the end, and whether or not you were killed before completing the mode.

Overdosed: A Trip To Hell is on Steam Early Acess now, and you can download the alpha demo for free here.

Overdosed: A Trip To Hell
Trailer