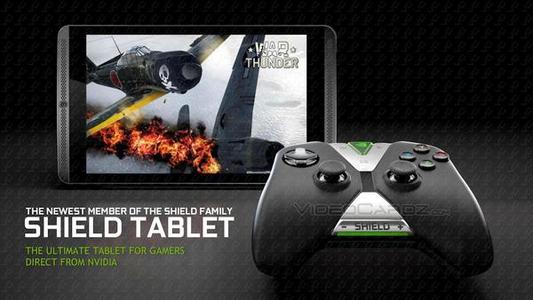 ​
Update: NVIDIA has officially announced the tablet here
​
It is no secret that NVIDIA has been working on a big and exciting product. They recently put up a website with a countdown that tells us “The Ultimate Is Coming”. Additionally, Multiple technology YouTubers have also alluded to secret meetings and powerful gaming devices, but due to NDAs they were not able to give us much information on the device. Fortunately, Videocardz tells us that this new device will be a gaming tablet powered by NVIDIA’s new K1 processor.

The new tablet is marketed as “the newest member of the shield family” and is appropriately named the Shield Tablet. The Shield Tablet will be powered by the newest processor NVIDIA showed us at CES 2014, the Tegra K1. The K1 includes an improved CPU (the 2.2GHz quad-core Cortex-A15 r3) and a new GPU. The new GPU features 192 CUDA cores which brings never-before-seen performance to mobile devices. In a 3DMarks graphics benchmark, the K1 performed nearly two times faster than NVIDIA’s previous processor, the Tegra 4. In addition to hardware, the K1 is paired with technologies such as OpenGL, DirectX, Tessellation, and CUDA to bring top notch graphics to the Shield Tablet at a remarkably low power consumption (<2W). The tablet also features 2GB of RAM, an 8” 1920x1080 IPS panel, a 128GB micro SD slot, and a 5MP in the front and back.

Much like the previous Shield, the Shield Tablet will include many of NVIDIA’s gaming services such as GameStream, ShadowPlay, Grid, and Tegra Zone. All of these services give you a wide assortment of games to play ranging from AAA PC titles to indie Android games. Performance aside, the biggest difference between the Shield and the Shield Tablet is the form factor. The previous Shield had a rather small screen and a non-removable controller. The tablet, however, has a significantly larger screen and the controller is sold as an add on.

There will be two versions of the Shield Tablet, one with WiFi and one with LTE. The WiFi model will feature 16GB of built-in storage and a price tag of $299, while the LTE model will have 32GB of storage and a price tag of $399. The tablet will also have two available accessories, the $59 controller and a $39 cover. NVIDIA will supposedly make the official announcement on July 22 and the tablet will be available July 29th in the US and Canada. The tablet will also be available in Europe on August 14th and make its way to the rest of the world by this Fall.