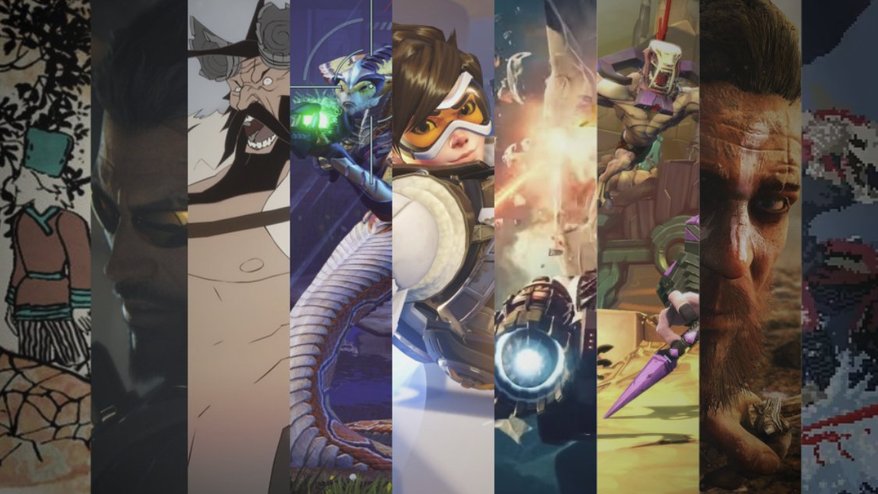 Research company SuperData today put out its report for 2016, revealing how much money video games brought in during the year, while a second report discusses November 2016 specifically.

Overall, SuperData reported that gaming software totaled $91 billion in 2016, with mobile games accounting for the biggest chunk, at $41 billion. Check out the chart below to see a further breakdown of how revenue broke down this year between platforms and sources. 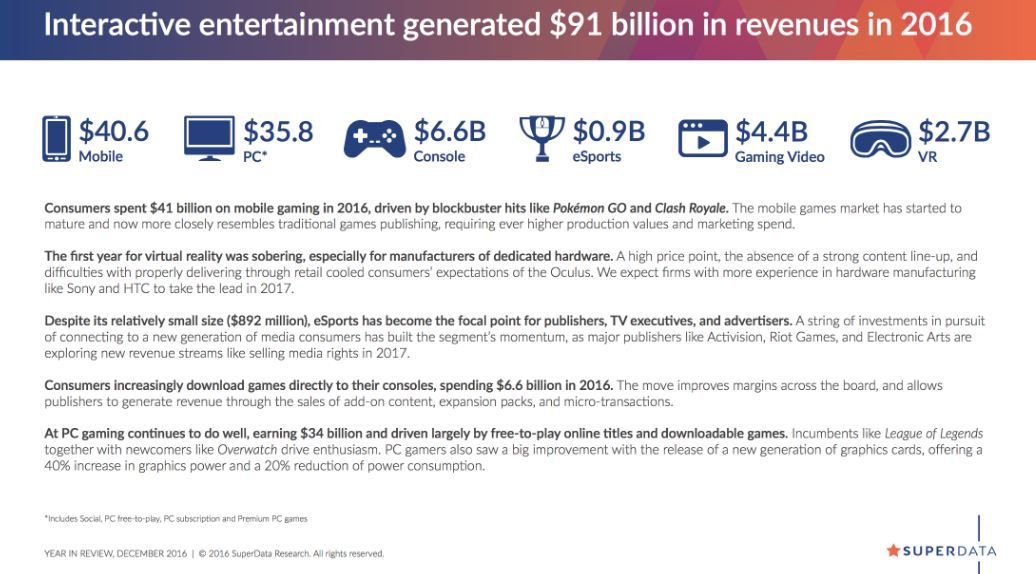 ​
"New categories like virtual reality, esports, and gaming video content, while still relatively small in size, hold an important promise for 2017 as they seek to connect to the growing audience for interactive entertainment," SuperData said.​
Mobile revenue was driven by big-name games like Pokemon Go and Clash Royale, the company said, though no specifics were provided about how much they made.

Virtual reality was a big storyline in 2016, with Oculus Rift, HTC Vive, and PlayStation VR all debuting this year. Oculus Rift faced a number of challenges this year, SuperData said, adding that it expects HTC and Sony (despite dramatic forecast downgrades) to emerge as the top VR companies in 2017.

"A high price point, the absence of a strong content lineup, and difficulties with properly delivering through retail cooled consumers' expectations of the Oculus," SuperData said. "We expect firms with more experience in hardware manufacturing like Sony and HTC to take the lead in 2017."​
The SuperData report also shows that people are downloading games to their consoles more than in the past, spending $6.6 billion in this area in 2016.

In addition to the full-year report, SuperData shared figures for November 2016 alone, saying digital revenue came in at $6.7 billion, up 13 percent compared to November 2015.


"Mobile, premium PC, console, and free-to-play MMO experienced year-over-year growth, with console seeing the largest gain of 35 percent due to the release of FPS blockbuster Call of Duty: Infinite Warfare and sustained revenues from Battlefield 1," SuperData said.​
Infinite Warfare sales, while still reportedly very strong, were down compared to 2015's Call of Duty: Black Ops III. According to SuperData the downturn was 27 percent.

Here are the top-selling digital games for November 2016, according to SuperData:

SuperData did not publish revenue estimates for all the games, but said Pokemon Go made $128 million in November. Go to SuperData's website to see a full breakdown for November.