No Man's Sky, a Fitting Title for a Lonely Game 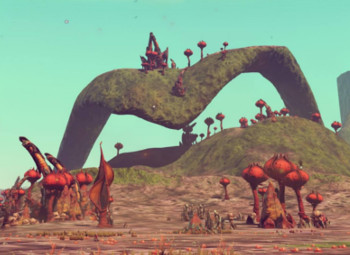 ​
"Space is big. Really big. You just won’t believe how vastly hugely mindbogglingly big it is. I mean you may think it’s a long way down the road to the chemist’s, but that’s just peanuts to space."

- Douglas Adams, The Hitchhiker’s Guide To The Galaxy​

By now, every gamer has probably heard of No Man’s Sky’s 18 quintillion planets and how they’re all unique, generated by mathematical formulae. But are those planets interesting and exciting to visit and explore? That’s the key to what differentiates a mathematical accomplishment from a truly great video game.

(Note: there are going to be spoilers in this review. It’s hard to avoid spoilers when the developers promise each player an unique experience, yet lead you through a series of tutorial steps.)

I’ve had the PS4 version since release day, and as of this writing, put in nearly two dozen hours. I’ve seen some marvelous things: giant hollow, rectangular rocks floating in the sky; rail-thin dinosaur creatures galloping across blue grassy hills; unimaginably huge planets looming in my windscreen, still hours away from arrival. I’ve even met a couple of lone aliens who offer a few dialogue or response choices. 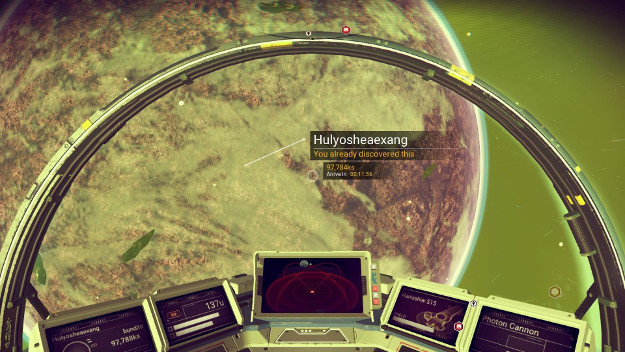 The title of the game – No Man’s Sky – is actually a huge clue to the overall feel of the game. I didn’t quote Douglas Adams at the beginning just for fun. Space really is big. No Man’s Sky is big. It’s so big that no man can own it or control it. It really is that big. It’s a lonely place, with quiet, ambient (and also procedural) music and a few sparse sound effects. There’s no orchestra crashing away during battle scenes, no dramatic voiceover – it’s just me, my starship, and my mining multitool. And 18 quintillion planets’ worth of space to explore, all on my own.

I’ve got nothing bad to say about the math planets. They are unique, fantastical, and make for some fun sightseeing. Geologic formations of all shapes and sizes abound, complete with caves, cliffs and deep crevasses. I found gravity-defying stones the size of city blocks, complete with trees growing on their surfaces. The same goes for the creatures. Things that look like mutated gazelles. Others that resemble spiders or crabs. I could scan them and learn their gender, their diet, even their disposition (avoid the carnivorous ones; watch the docile ones scatter).

Most of my time planet-side was spent harvesting resources, necessary for fueling my spacecraft, exosuit, and my mining tool/all-purpose weapon. I came across waypoints to unlock, which also credited me with the discovery (and saved my game). Sometimes, small buildings surround the waypoint markers, and I was welcome to explore inside. Sadly, I didn't find much. Maybe some extra resources, maybe a blueprint for an upgrade to your suit, ship, or tool.

I was doing a whole lot of juggling inventory squares, trying to make room for that fresh stash of necessary plutonium, or sacrificing a slot for that rare, expensive, but otherwise useless trinket. My suit and ship have different inventories, but I could swap between them, even while outside and at a modest distance. And I can always manage both inventories at any time – you don’t need to be in your ship to manage its inventory. 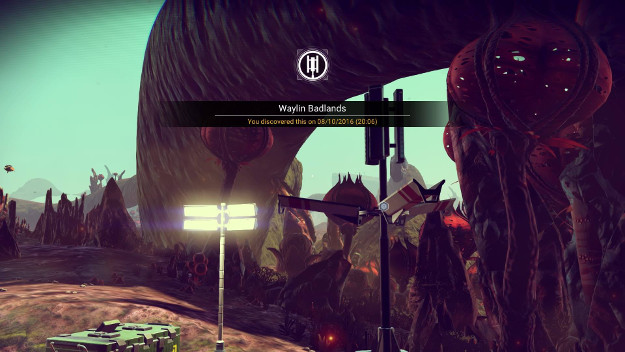 But how much fun is it to play? That’s an impossible question to answer, just like the universe of 18 quintillion planets is impossible to completely visit. Do you have dreams of conquering the galaxy and being proclaimed emperor? You’ve got the wrong game. On the other hand, do you like slow-paced, solo exploration? No Man’s Sky certainly has that – possibly to excess. The procedurally-generated planets don’t have much going on besides the wildlife and the occasional smattering of lookalike buildings. You might get lucky and find a modest upgrade, or you might find nothing more than cargo drops of the same minerals you could have mined a few dozen meters away.

At one point, my planetary scanner alerted me to the presence of a trading outpost. I was immediately intrigued and steered and warped toward it as fast as I could. When I arrived, I found it to be a slightly larger-than-normal stock building with several landing pads. The “trading outpost” turned out to be an ordinary trading terminal, identical to the ones you find in the commonplace space stations. Buy items through an interface, sell items through an identical interface. No change whatsoever.

Likewise, I was pointed toward an abandoned structure, poetically on a moon above a gigantic planet. But you know what? That moon had procedural terrain, procedural plants, and procedural animals. It also had a small building with one terminal to access and a few lines of text to tell me what I’d found. That’s it.

(There’s a whole branch of the game I’m deliberately avoiding, which would be the three “paths” you can choose to follow through the universe. That would be an actual spoiler, and I’m not going to ruin one of the more fun parts of the game and its lore.) 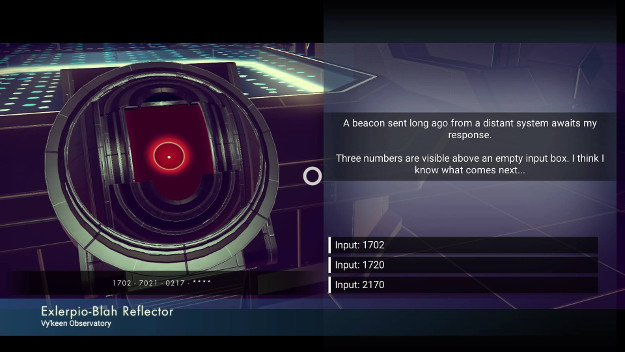 Does all this mean I hate the game? No, it’s more complicated than that. I find it very intriguing, fascinating, and an incredible technological feat. But to be honest, traveling between planets and the real-world time it takes becomes tedious after the first four or five trips.

The planets, with their randomly-generated names, don’t make a huge impression. There’s not one I’ve told myself I need to revisit and finish exploring (despite a large cash bonus for doing so). There’s not one I want to show off to friends so they can see the floating stones or the blue crab creatures. In fact, the interactions with the lone aliens may be the highlight of the game for me. You can learn individual words from their indecipherable languages, trade with them, or learn little facts about their society.

The main problem with No Man’s Sky is the repetitiveness. There’s only so much interaction an algorithm can build into a game, and they’ve only allotted a small amount of space for the story writers to do their thing. Once you’ve flown between planets or moons and dodged asteroids a handful of times, it starts to feel like a chore, not a delight. As different as the planets are, they all start to feel the same. Because you’re not there to admire the psychedelic imagery – you’re there to mine minerals and scan animals for profit. That doesn’t mean there aren’t moments of wonder in the game – for there are plenty. The landscapes will catch your eye and make you utter a quiet “wow”. But traveling between planets takes a fair bit of real time, and searching for platinum among the plutonium just isn’t that exciting.

In closing, it’s impossible to call No Man’s Sky a bad game. I’ll keep playing it, following those mysterious leads I didn’t dare spoil. In the meantime, though, I’ll be traveling to and from a lot of procedural planets and mining a whole lot of minerals. And wishing I had more inventory space. Always more inventory space.

If you’re on the fence about buying No Man’s Sky, it’s hard to offer advice. You may absolutely love it. You may absolutely hate it. You may fall somewhere in the middle like I do. It’s one of Sony’s biggest PS4 exclusives of the year, so don’t hold your breath for a PSN sale any time soon. You won’t find anything like it, and while that may be damning with faint praise, it’s the truth. It’s a unique experience and what you get out of it may well be what you put into it.

(Final note: there have been some technical issues plaguing the PS4 version of the game. I’ve had about three or four hard crashes to the PS4 desktop, not a great track record for the first 12 hours of play. Also, the planet visuals tend to draw in slowly, particularly when flying your spaceship. On foot, there’s no problem. Hopefully rapid patches can fix these immersion-ruining bugs.)
About author