No Man’s Sky Adds More Underwater Gameplay With The Abyss 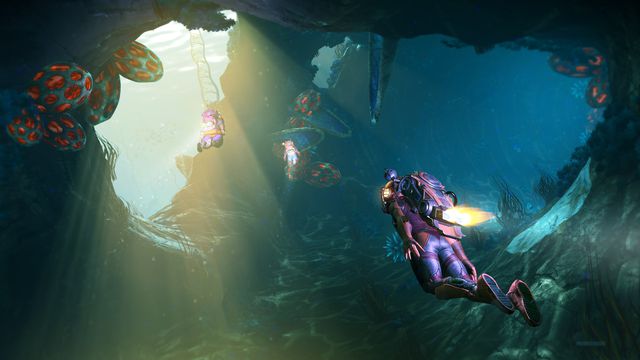 Today the team at Hello Games is launching a massive new update for No Man’s Sky. Called The Abyss, it focuses on expanding gameplay in underwater environments. Following the release of the Next update in July, Hello Games has rolled out a number of smaller updates, including additional cosmetic options, vehicles and more. The Abyss is, so far, the largest of those updates. According to a news release, it includes five new underwater biomes and a host of additional features to allow players to explore and inhabit aquatic environments.

“We wanted to focus on improving underwater,” said Hello Games, “and also on some of the eerier elements of the game for Halloween. Oceans were always vast in size in No Man’s Sky, but are now a huge, deep part of our gameplay.”

A trailer for The Abyss, also referred to as update 1.7, shows vastly expanded underwater environments. Hello Games said that it’s added five underwater biomes for players to discover and filled them with greater quantities of “more interesting” creatures. The video shows octopus-like aliens jetting around in the distance, but also a breed of monocular megafauna that appears is best avoided at all costs.

The Abyss will also add more options for base construction with over a dozen new parts for use exclusively under the oceans. The trailer shows long, transparent corridors that could be straight out of BioShock’s Rapture, while today’s press release makes mention of a “multistory submersible view dome.”

Of course, the starships in No Man’s Sky aren’t very much use underwater, so Hello Games is also adding a new vehicle, or exocraft, called the Nautilon. The submersible is fully upgradeable with a slate of purpose-built bits and will also include cosmetic options as well.

Rounding out the update are some mechanical improvements. Hello Games said that it’s completely reworked underwater movement, even adding a jetpack boost so that players can cover more ground on their own. They’ll need that speed to explore the game’s sunken ruins through and what it’s described as “several hours” of additional narrative gameplay.

The free update launches today for PlayStation 4, Windows PC and Xbox One. The release will also coincide with a 50 percent discount on all three platforms.