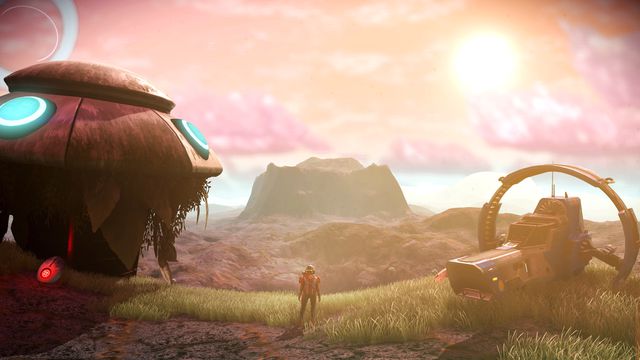 No Man’s Sky is getting a bunch of big changes this week. Hello Games will release the Vision update for its space exploration game, bringing with it a “weirder, more surprising universe.” More varied flora and fauna, more colourful worlds — No Man’s Sky even has rainbows now.

The Vision update, version 1.75 of No Man’s Sky, will offer more than just new and interesting aesthetics; the game is also adding additional things to discover, salvage and collect. Hello Games has added, “mysterious artefacts” that can be found on alien planets and displayed as trophies in your planetary base.

Players can also excavate the ancient bones of alien creatures for lucrative rewards; salvage crashed ships and satellites for scrap; and harvest new crystal materials from hazardous planets, resources that light up during extreme weather.

No Man’s Sky is also getting new lifeforms, including some that look like ordinary minerals but are actually predatory fauna. Flora is getting deadlier, too.

Hello Games is also updating how Community Research missions work. Players can share their individual progress to work toward a common goal. Rewards include “new emotes, building parts and a range of fireworks.” Oh yeah, they also added fireworks.

The trailer above highlights those changes and others coming to No Man’s Sky with the Vision update. All that content drops on Thursday, Nov. 22.