"Next Car Game" Finally Gets a Name!

Finnish developer Bugbear Entertainment are behind games like Flat Out and Ridge Racer Unbounded, and their next title is unsurprisingly enough another car game. Up until now it has been known under the title "Next Car Game". It failed to reach its goal of $350.000 on Kickstarter a while back, reaching only $81.772. However, without even having an official title it quickly earned $1.1 million after the release on Steam Early Access. This included sales of the pre-alpha version from their official site as well. A few days ago the developers announced the completion of #Build6 including several new features to the multiplayer along with the official title of the game, which is, wait for it... Wreckfest.

Wreckfest aims to let you relive the glory of Flat Out and Ridge Racer Unbound with today's technology. The developers claim that they are going back to their roots with this, and using their own in-house engine ROMU they want to create a true-to-life physics simulation that allows you to experience "exhilarating racing action with sophisticated physics and damage modeling." It is basically insane high-speed racing combined with crashing and wrecking cars in great detail. How can you go wrong with that? 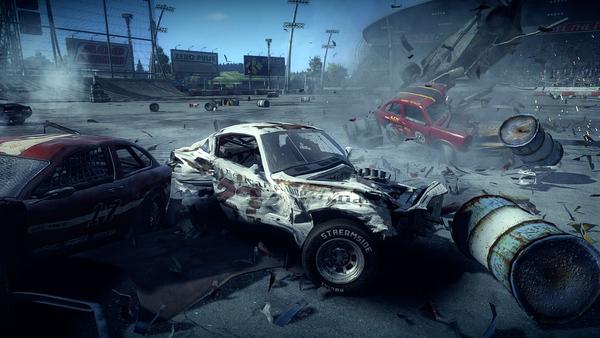 The multiplayer consists of four modes: Racing, Demolition Derby, Deathmatch and Team Deathmatch. It is currently supporting 18 players, but they are working to reach their goal of having 24 players go mental online at once. Demolition Derbies with 24 players going at each other in rusted and banged up old American muscle cars or European and Asian funny cars from back in the days sounds like a lot of fun to me, but if you feel like crashing around solo, career mode will let you patch up and modify your rust bucket to meet your needs. In your garage, you can take all your scavenged parts and rebuild until you are happy.

Through Early Access on Steam you can wreck havoc in the 18 player multiplayer right now if you can afford the $29.99 price tag. As a part of the last update you can try out the new Deathmatch and Team Deathmatch modes too. The game is available on PC only for the time being, but lead Game Designer Janne Suur-Nakki is "hoping that we will have a chance to port the game on PS4, Xbox One or both somewhere along the way," as was their intention when they started the failed Kickstarter campaign last year.

This fall has several great car titles lined up, will Wreckfest have what it takes to get your attention? Will you consider buying a copy if it hits consoles?