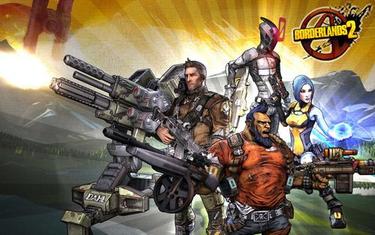 Fresh from Gearboxes own vault of secrets comes a new trailer hitting Youtube only mere hours ago. Aside from the funny repertoire present in most Borderlands 2's trailers, details have been unearthed concerning some storyline plots, weapon variety, enemies, and more showcasing of each character's unique abilities and weapon preferences. Gawking is allowed, enjoy what the trailer has to offer.

Barring the obvious details, Handsome Jack is clearly Pandora's new Murderer in Chief whilst claiming the title of antagonist as he attempts to stop the Vault Hunters with his vast armies and arsenals. New creatures and vehicles were also shown briefly alongside the possible return of a souped up land runner from Borderlands 1. Upgraded chests, possibly part of the mix, reminiscent of chests found in the General Knoxx downloadable content for Borderlands 1 will also debut in the original Borderlands 2. It is likely that these chests will be rare and players will find more classical chests throughout Pandora. It may just also be the exclusive chest given to those whom preordered the game. Face time was given to each character's unique power. The Commando donned his metallic counterpart, The Turret, which makes Roland's Scorpio seem like a child's toy. The Gunzerker, after "flipping the bird," dual wielded heavy armaments into battle while Zero sported his own unique abilities. The Siren, rather than moving quickly as her special power, has a sort of ability to draw in enemies and slowly damage them.

Other noticeable details are easily found throughout the trailer. Borderlands 2 will certainly draw in a larger crowd than its older brother, but, regardless of such splendor, Borderlands 2 will irrevocably be a cooperative game of the year. With graphical improvements that stay true to its core, humorous voice acting and characters, more guns, variety, and vast exploration, it would be difficult to find a reason not to enjoy Borderlands 2 with a friend or simply by yourself. Borderlands 2 will be hitting shelves September 18th.
Click to expand...