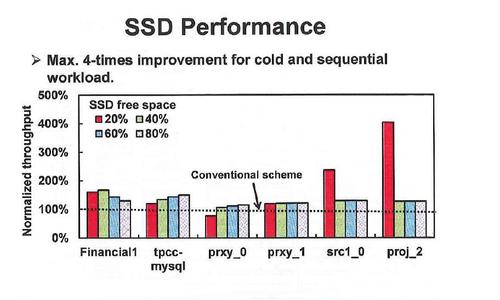 Over the past couple of years SSDs have been rising in popularity. Their fast speeds matched with their constantly lowering prices seem to be making them a more popular choice for consumers. New middleware being developed by a Japanese research team could make SSDs even more appetizing by increasing their maximum speed while lowering power consumption.

With the current NAND flash technology we have, data cannot physically be overwritten over the same area. Currently, SSDs need to write new data to a completely new area, then get rid of the old data. The process of getting rid of the old data can cause fragmentation and it can take up to 100ms, which can heavily impact the overall speeds of the SSD. Although the speeds of SSDs seem to be fast enough for most, Ken Takeuchi and his research team have sought out to fix this problem and increase the efficiency of SSDs.

Last September, the team led by Takeuchi developed a thesis titled "NAND Flash Aware Data Management System for High-Speed SSDs by Garbage Collection Overhead Suppression" which aimed to improve the way data is written on SSDs. The team improved upon current middleware that is used for storage in databases to increase the SSD performance. This time around, the team wants to develop a new method that is more applicable to a larger array of uses.

The new method involves complicated technologies, but ultimately accomplishes the goal of better SSD performance. Basically, the technology allows the OS to write to areas of the SSD that are about to get deleted, instead of brand new areas. This creates less areas that need to be deleted. Therefore shortening the 100ms delay caused by deleting areas. According to a simulation the team ran, the time saved resulted in write speeds nearly four times faster than conventional speeds. In addition to an increase in write speed, this technology also reduces the power consumption by up to 60% and write/erase cycles by up to 55%. This means we can expect the average lifetime of SSDs to increase as we see this technology applied. It should be noted that these results come from a simulation, and the exact scenarios in which the writing was simulated in is unknown.

Right now we haven’t seen the technology used in real applications, nor do we know if the numbers gathered from the simulation are reliable. It is, however, clear that this technology can improve the speeds of SSDs none of the less and it will be exciting to see this technology roll out. It's unknown when we will see this technology as consumers, as it seems the technology still isn't quite ready yet. Fortunately, once this new method is released it could be applied to any existing SSD, it is just a question of whether manufacturers will update their old SSDs or only apply this technology to new SSDs.