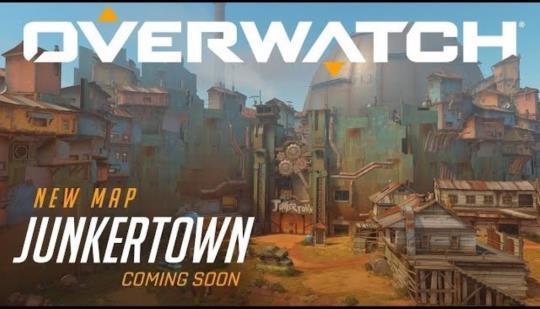 A new map is now available in Overwatch, at least for some players, and only on PC. Junkertown, which is set in Australia and is the home to Junkrat and Roadhog, is a new Escort map.

​
Here is the official description for Junkertown: "Constructed from the remains of a destroyed omnium, it's now the home to a band of lawless scavengers known as the Junkers, led by their cutthroat Queen. When they aren't pillaging the omnium's skeleton for anything of value, the Junkers blow off steam in the Scrapyard--a massive gladiatorial arena whose combatants fight for glory, riches...and to survive."

There has been some amount of controversy over the Junkertown map regarding how it uses the American term "take-out" food instead of "take-away" as it's known in Australia.

There is no word as of yet as to when Junkertown will be available for everyone across PC, along with PlayStation 4 and Xbox One.

It's a big day for Overwatch, as the game added Deathmatch modes today as part of a bigger update--you can get all the details and check out the patch notes here. Additionally, Blizzard outlined the changes it's going to make to the player-reporting system.