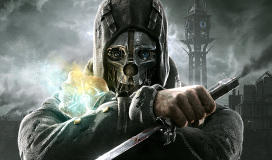 Bethesda released a new trailer for Dishonored 2 today, showing original protagonist Corvo Attano up to his old tricks. As the trailer opens, he slips on his iconic mask, muttering “One more time, old friend.”

This new trailer shows Corvo as he undertakes his deadly mission to dethrone the mysterious and otherworldly Delilah. She’s stolen the throne and plunged the thriving Empire of Dunwall into chaos. Defeating her won’t be easy, as we can see below:


​
Dishonored 2 takes place 15 years after the original, in which young Emily Kaldwin took her place as the rightful ruler of the Empire. As the game begins, you’ll be able to choose to play once more as Lord Spymaster Corvo, or as the dethroned Emily, whom Corvo had been training. Both will have a different variety of skills at their disposal, not to mention supernatural powers granted to them by the mysterious Outsider.

Stealth remains a key mechanic in Dishonored 2. As either character, you’ll be able to complete the entire plot without killing a single person. However, both Emily and Corvo are capable of deadly combat, as Corvo aptly demonstrated in today’s trailer.

Dishonored was one of the bigger hits back in 2012, but we don’t have much longer to wait for the sequel. Dishonored 2 will be released on November 11.
About author