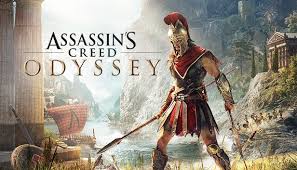 The launch trailer reveals further details about the upcoming DLC, including the faces of the friends and foes that Kassandra/Alexios will meet. We finally get our first good look at the man who shows Kassandra/Alexios the hidden blade. Assassin's Creed II established Darius I, son of the Persian king Xerxes, as the first recorded person to use a hidden blade, but this will be the first time the man has appeared in a mainline Assassin's Creed game since Ezio Auditore explored his tomb.

The trailer also shows a new Persian-based enemy group trying to kill Kassandra/Alexios. Not much is revealed about them other than that they are hunting down Odyssey's protagonist for being one of "the tainted ones." The enemies are wearing masks though, some of which look a lot like those worn by the members of the Order of Ancients in Assassin's Creed Origins.

Ubisoft previously announced that each episode of Legacy of the First Blade will release roughly six weeks apart, so we can probably expect Episode 2: Shadow Heritage in January 2019 and Episode 3: Bloodline in late February or early March. The second major Odyssey DLC, The Fate of Atlantis, is also divided into three episodes and scheduled to premiere in Spring 2019. Between each episode of both DLCs, Odyssey is getting smaller expansions titled The Lost Tales of Greece. Odyssey's DLC is all the Assassin's Creed that fans will be getting in 2019, as Ubisoft has announced there will be no new game for the series next year.

Assassin's Creed Odyssey is available for Xbox One, PS4, and PC.