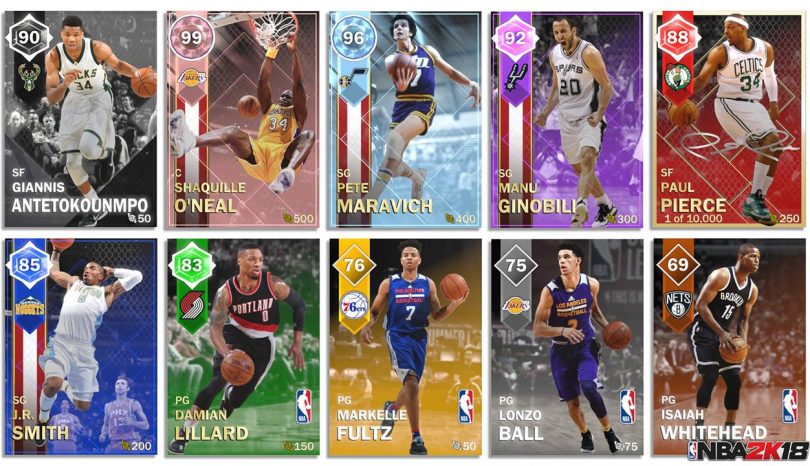 2K continues to share more details about the upcoming NBA 2K18. Today, it revealed what's new and different in MyTeam, the card-based mode that resembles Ultimate Team in EA's line of sports games. 2K18's primary additions to MyTeam come in the form of two new ways to play, each of which offers rewards for doing well. Pack & Playoffs allows you to open packs, build a team, and try to come out on top in the playoffs. As you advance through rounds, you'll have to redraft your team (unless you're willing to spend Virtual Currency to maintain your existing one).

Super Max imposes a salary cap on online play, meaning you'll have to take into account the salary of a given player when building out your roster. You'll play through a series of rounds, with each one adjusting the value of cards in response to how much they're being used. Super Max has you first compete against random players online before placing you into a skill-appropriate league depending on your performance.

On the single-player side, Schedule Challenges will provide you with a 30-game schedule for each NBA team. That makes for a total of 900 challenges, and making your way through them will reward you with prizes and MyTeam Points. Separately, you can also take on 33 historic teams that feature players ranging from Kobe Bryant to Kareem Abdul-Jabbar.

Coaching is a more important aspect than before. Regardless of the MyTeam mode you're playing, 2K18 uses a "new system proficiency tech that optimizes teams based on eight different systems." Before assembling a team, you first get a coach--and, with them, a system your team will run. You'll want to cater your player selections to that coach and system. Strategy cards can be employed during timeouts to provide various bonuses.

Other changes of note include reserve bidding and real-time updates on the auction house, an improved collections menu to make it easier to browse the increasing roster of cards, and more Dynamic Duos (along with a way to more easily find matching pairs). Other small refinements are detailed in a developer blog post here.