The tantalizing success that Minecraft has rewarded game developer Mojang with may soon be complimented with an injection of prosperity with a Minecraft movie. Mojang's chief executive, Carl Menneh, explains, that with efforts to branch the Minecraft name to other outlets aside from the world of gaming throughout the year, that making a Minecraft movie is a feasible option. Menneh also claims that "[Mojang has] been approached by a number of high-profile Hollywood producers and asked to do TV shows. We may do that. It's hard when you don't have any experience and someone comes to throw these ideas around. We have so much to focus on with just the game development and growing the business. But if the right idea comes along and the right people that we'd want to work with, we'd say why not?" 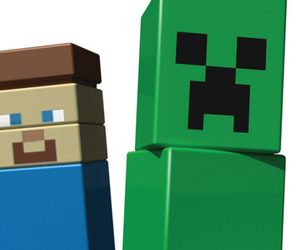 Even if a Minecraft movie is not in the pipeline, which I believe to be quite unlikely, with much Minecraft brand apparel, toys, and Legos to debut soon, Mojang will certainly see a noticeable increase in revenue and new fans under the Minecraft flag. Do not forget about the upcoming Minecraft port to the Xbox 360, which is sure to expand the already competitive and successful game to more than one platform. The sheer ability of the game to allow one to explore the possibilities of building whatever one may want in a fashion similar to Legos has always struck the gold mines of peoples' hearts. There is simply no limit to what a player can build in Minecraft; to this is what Minecraft owes most of its popularity to. Although I am not a fan of Minecraft at all, I am quite glad to see an innovative and prospective game developer take step in a bold world with a game that invokes a feeling of unusual happiness in once a small denominator of gamers; a dedicated denominator which has brought Minecraft the player base that it has today.

If there is to be news of a Minecraft movie in development, Mojang is certainly going shed light on its progress. As for now, may Minecraft fans relish in the upcoming Minecraft invasion of retailers and the Xbox 360.