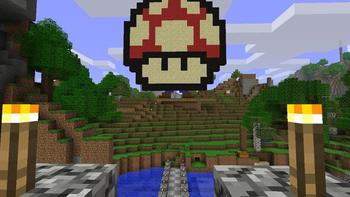 Minecraft is huge on mobile, PlayStation, Xbox and PC, having astoundingly high sales numbers. But one big platform is left out, one that would suit the game and its audience perfectly. But Nintendo hasn't shown much interest in obtaining the title to its library, they seem to be more focused on creating their own. And Mojang seem to be happy where they are. Or are they?

Previous owner and creator, Magnus "Notch" Persson, stated in the past that he was not against the idea of releasing Minecraft on their consoles, but simply put a stop to further speculations with a Tweet:

But recently we have seen bits and pieces of information come up, even though Nintendo has stated that they don't need to have Minecraft available on their consoles. The game is not as big in Asia as it is in the west, and they already have the somewhat similar Mario Maker. According to them, the only reason for them to welcome the game on board, would be to help Minecraft expand in Japan. And lets be fair, that is not really much of an incentive for them. However, in an interview at the last E3 convention, director and general manager of Nintendo's EAD had the following answer when it was suggested that they should give Mojang a call:

"Maybe we're meeting with them! Who knows?"

Since then, we haven't heard much about the topic, and the fact that Microsoft bought Mojang earlier this year made a release on Nintendo seem rather unlikely. But when interviewed at Minecon earlier this month, Mojang COO Vu Bui opens the door for hopes and speculations yet again, answering questions about the future and growth of Minecraft:

"If I had my way, we’d be on everything, we want to continue to be available to all players, and that means being on new platforms because everyone uses something different."

When asked a direct question regarding a port to Nintendo, this is his response:

"I've never heard a reason why we haven’t ended up on Wii U or 3DS. It just hasn't happened yet."

Would you like to see Minecraft on the Wii U or on a 3DS? And do you think it will ever happen?