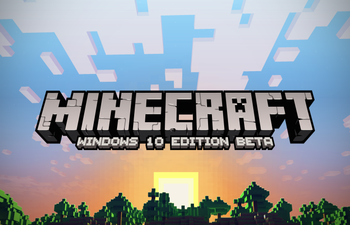 If you ever played Minecraft on the PC you will understand how a large proportion of the fun is endured on multiplayer servers. With this new edition of Minecraft being released you can now play cross-platformed. That's right you can now play with your Xbox, and mobile edition friends on Windows 10.

The new version will begin its beta testing on July 29th on the Windows 10 Store. Players who already own the PC edition of Minecraft can download the Windows 10 Edition for free. If you do not own the PC version already you can pick up the beta for a small fee of 10$ during the beta period. If you buy the game during the beta period you will receive the full game for free when it comes out of the beta and will receive future updates at no additional cost.

This edition will not replace the existing version of Minecraft as Mojang confirmed this is a separate game just to take advantage of all the new features included in Windows 10. Many people expected this to happen as Microsoft acquired Mojang last year for $2.5 Billion.

Mojang has confirmed that this version of Minecraft will include support for an Xbox One controller, game play recording highlights built in, up to seven player cross-platform multiplayer, and all the items you have came to love from the PC version. I hope you are as excited as I am to see this version released and built from the beta up. Please leave any comments or concerns below the article and thanks for reading.

Sources: Mojang, TheVerge, Polygon
Thanks Chazay for the video.
About author