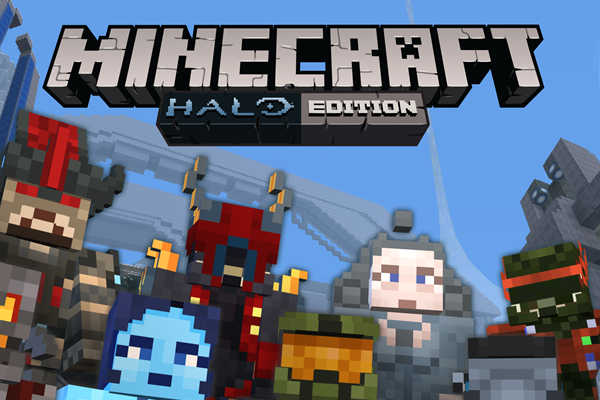 Today is one of the more substantial days in terms of Minecraft, as the “Halo" mash-up pack is released on Xbox 360 edition of Minecraft. Users can relax in their creative Minecraft worlds while still enjoying the magnificence that is Halo with this new mash-up pack. As well as this however, a new patch is being rolled out today for the PS3 edition of Minecraft. This is good news to Minecraft players on either consoles as they have something to look forward to for today.

First of all, the awaited Halo mash-up pack for the 360. Players have been looking forward to this since it has been announced (as well as constantly tweeted about on the 4J Studios Twitter). Players can look forward to reliving some of the older Halo, Minecraft style, as the mash-up pack brings plenty to the table for everyone to enjoy. In the mash-up pack, players will be able to take full advantage of the Halo themed texture set, as well as themed menus and user interface. There will be 31 Halo themed music tracks to choose from, as well as, and perhaps most importantly, 40 new Halo themed character skins! There truly is nothing quite as incredible as killing creepers while skinned up as Cortana or SGT. Johnson!

4J studios have also confirmed that by purchasing the mash up pack on 360, you will own it on the Xbox One version of Minecraft.

Within this pack there are some old Halo locations available to you, mainly older Halo multiplayer maps, such as Sandtrap, Guardian, Valhalla and Blackout as seen below:

Images can be seen there.
Now for PS3 users, you will all be happy to here of some addition texture packs for your enjoyment. Included are the “Candy” texture pack and the “Natural” texture pack. These accompany some other packs as well as plenty of bug fixes, thus making your Minecraft experience far more enjoyable! The patch notes can be found below:

- More voice chat fixes.
- Fix for players going invisible after death (on respawning).
- Fix for players going invisible when two players go through a nether gate at the same time.
- Fix for players sometimes being invisible after teleporting until either they move, or the player that sees them as invisible moves.
- Fix for Noteblock pitch being wrong – more noticeable when chords are played.
- Fix for Mobs dying in walls (happens for baby mobs after they become adults).
- Fix for chunks not loading in maps - tends to be specific seeds.
- Fixed streaming music not playing after a playing CD has been ejected from a jukebox
- Fix for player being able to attach Signs to the Chest with a block placed above it.
- Fix for player being able to breed wild Ocelots.
- Fix for player being able to breed Ocelot with Cat.
- Fix for tame wolves being removed if no players were near them when they were angry.
- Fix for Potion of Night Vision corrupts the game's UI while player is falling into the Void in the End.
- Fix for the damage decals flickering and/or not present if players are not close to each other in Survival Mode in a local splitscreen game.
- Fix for damage decals not displaying in splitscreen if the secondary player is 30 + blocks away from the primary player
- Fixed lava drip particles being too dark/black
- Fix for sitting wolves (or stationary entities) not being immediately visible if a remote player spawns next to them, or spawns far away and quickly heads towards them
- Fix for Leather Armour not displaying the enchantment glow.
- Fix for Enchanted item in hand effect being wrong.
- Fix for blocks placed at Y 128 being black on top.
The pack will be available for $3.99/€3.79/£2.69. A great day for Minecraft all around, personally, I am very intrigued by this Halo pack, as I feel it will be both nostalgic and very interesting. This could be the first expansion I purchase for the 360 edition of Minecraft. How do you feel about this new pack? Would it be something you might buy?