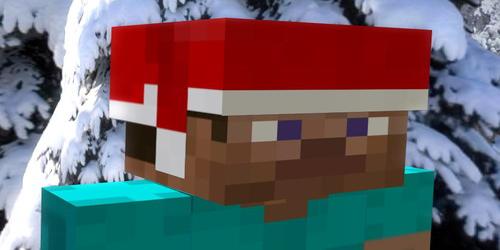 As Christmas Eve itches on over day by day, 4J Studios climbs closer to a faithful release of the long anticipated Title Update 7 which many of you are eagerly desiring. Minecraft is due for several updates beyond the TU7, and 4J Studios teases an already excited community base with some news on goodies some of you may be unaware of whilst elaborating on what exactly will be coming with TU7.

On December 19th, 2012 expect a warm, festive addition to the Minecraft skin pack repertoire as 4J Studios ushers in the Festive Skin Pack for players to enjoy at a cheap 80 Microsoft Points. Players will be able to don Christmas-friendly skins such as, but not limited to:

These spanking fresh skins arrive a mere three days before an inviting documentary covering the birth of Minecraft and the company behind it as it follows Minecraft creator Markus Persson. On December 22nd, 2012, any Xbox Live Gold suscriber from the United States, United Kingdom, France, Germany, Australia, and New Zealand will be able to tune into this documentary for free by accessing a Minecraft tile on the Xbox 360 dashboard. The times of airing vary on location so be sure to check the Minecraft tile to see what time your locale will be able to watch the documentary.

Information concerning TU7 is aplenty, but for those who have no idea what TU7 entails, here's a brief list on new items and features coming with the update:

Enchantments will be added into Minecraft. You will be able to utilize old magics from an Enchantment Table to buff up your armor, tools, and weapons with abilities that can do amazing things. For example the ability "Fortune," will ensure your Diamond Runs bring forth a more quantitive package of Diamonds upon your return to the surface.

Experience Points will be added and are essentially your currency for Enchanting. You can earn Experience Points from slaughtering those baddies out in the Overworld (and passive mobs), mining blocks, using furnaces, and breeding!

Breeding makes a debut on Minecraft permitting players to make their ranches more lively, for animals will be able to reproduce! Snatching two valuable Sheep and feeding both a certain food will allow them to mate and bring forth an adorable little offspring that will eventually mature.

Brewing is another addition to the game which presents a new item: Potions. A Brewing Stand is required to make Potions. Don't forget your glass bottles!

Nether Fortresses, Overworld's Strongholds' evil brother, will be added into the Nether. These sinister structures are what Blazes, a new enemy that enjoy spewing seething fire, call home. New blocks can be extracted from these structures whilst braving the unforgiving Nether.

To those that enjoy Mushrooms, 4J Studios will finally throw a new biome onto the biome list for Minecraft. Expect to find Mushroom Biomes scatter across some worlds. Mushroom Biomes are home to giant mushroom and are relatively safe from hostile mobs.

Do you want your skins to have a tad bit more bling? Skin animations are much overdue, but, thanks to TU7, players will be able to enjoy a number of their purchased skins having special animations. Zombie skins will have the distinctive "Frakenstein," walk, and other skins will sport different animations to give you more bang for your buck.

There are unlisted features, too, that are sure to come with TU7. There is also a list of new items! Feast your eyes upon these new items:

Cows claimed by Mushroom infection, named Mooshrooms, can be found out in the Overworld.
Blazes roam the Nether
NPC Villages will now be home to Villagers
Players will be able to construct Snow Golems
Magma Cubes, the Slimes cousin, can be found in the Nether.
Baby Animals are new mobs and can be made through Breeding.

TU7 is surely to be another release that will revolutionize the Xbox 360 Edition of Minecraft. Soon it will be on par with the vanilla version of its PC counterpart and will be set to embark on its own path. As it seems now, that unique path will be littered with special goodies Xbox 360 holders of Minecraft will be able to enjoy to the fullest. Are you excited for this new update?
About author