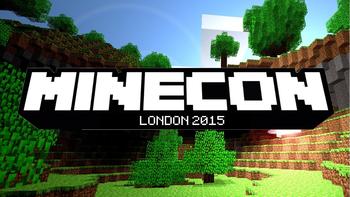 During Minecon in London earlier today, the Upcoming Features Panel revealed several new changes and additions the game will be seeing in Update 1.9, and shared some news about the Pocket Edition too.

Developer Mojang’s Owen Hill, Daniel Wustenhoff, Tommaso Checchi, Jens Bergensten and Nathan Adams spent an hour talking about the new features they have in store, including a harder-to-beat Ender Dragon as the end boss of the PC version. Adams promised a harder challenge this time: "The Ender Dragon right now in the PC edition is not right. You go to the end, you break a few blocks, then you hit him over the head a couple of times." It will also be possible to respawn the dragon if the necessary items are crafted.

There will also be a new area entirely, replacing the current end game island. The new location will be more like the Nether, with resources to gather and treasures to find. One example is a new type of tree that can be mined for "chorus fruit", which in turn can be used to create new types of blocks. The area has a yellow, purple and black color scheme, so it will definitely stand out from the rest. A new mob called the Shulker will shoot projectiles at players that bounce off walls and travel round corners. These projectiles can be used to reach higher ground, as a player hit by them will levitate. Unless the fall damage kills them if they are unaware or miss the landing spot.

Another welcome addition to the game is the ability to dual-wield. Whether it is a pickaxe and a torch or, another new feature, a shield and a sword, this will make both mining and fighting easier, and potentially more fun. Other nice additions are the ability to enchant arrows, the creation of levitation potions and finally, they are adding customizable banners. Among other things, find the rest of the new features here.


​
Mojang will soon release an update to smartphones and tablets adding the main game’s Nether region, complete with mobs and items. It was also confirmed that the Minecraft: Pocket Edition will have the ability to make redstone circuits by the end of this year. The Realms server service is also on its way. None of these new features have a set date for release yet, so we will just have to wait patiently for all of this awesomeness to arrive.

How will these changes affect your Minecraft experience? Am I the only one exited to run around with a sword and shield, finally?