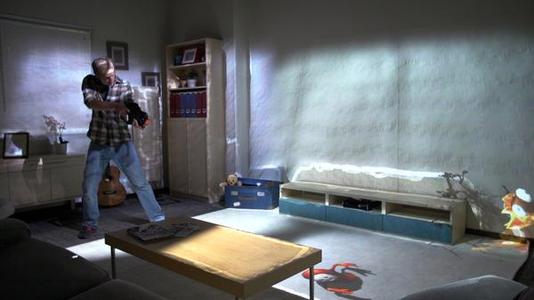 Nearly 2 years ago, Microsoft unveiled their research project titled "IllumiRoom". IllumiRoom was essentially a concept project which would change the way you play video games. Instead of using your TV as your only output source, IllumiRoom was designed to utilize all of the walls and surroundings in the room you are playing in and then project images relating to the game you are currently playing onto the walls which would allow for a bigger playing area and it would also create a truly immersive gaming experience for the user.

Ever since the initial reveal, Microsoft have not shed much light on how IllumiRoom was progressing until a few days ago when a video was released giving us more details on how IllumiRoom is progressing. Throughout the video we learn that Microsoft have changed the name of the concept from "IllumiRoom" to "RoomAlive". Another key detail which many have noticed is that in the first version of RoomAlive which was showcased roughly 2 years ago, The additional image projections and extra play area was limited to the wall located behind your TV but now in the latest edition, RoomAlive truly brings your room to life with various graphics portraying the game you are playing being projected across all of the walls, floor and ceiling. The user is able to move around freely in the room and are not limited to their generic seated gaming position.

RoomAlive has capabilities of things such as changing entire textures of rooms to make it seem as if there are things such as rivers complete with dynamic raindrops in the room. It can also generate a Whack-A-Mole game which allows multiple users to compete in a game where a mole appears in various locations in the room and you can either use a gun and fire at the mole or touch the mole to make it disappear and gain points. It can also randomly generate user controlled robots which are able to move freely throughout the room chasing a generated enemy. The last feature of RoomAlive would be that it can arm various "traps" in your room and it's the users goal to avoid these traps. If the user gets caught in these traps, it is shown by a variety of images of the user bleeding out. To summarize it all, RoomAlive transforms entire rooms into dynamic and interactive environments creating a rich and immersive experience for the user.

RoomAlive is currently still a concept and prototype with absolutely no intentions of releasing it to the public any time in the near future. The RoomAlive team confirmed they are still continuing to improve the overall experience and they will continue research and experiments. They said, "In the future we will explore approaches and experiences that involve multiple users and multi-user viewpoint rendering, We will also explore new ways to increase immersion with spatialized sound. RoomAlive provides a glimpse of how a scalable multi-projector system can transform any room into an immersive augmented gaming experience. Many new and exciting possibilities remain to be explored."

Many people now would not like to have this because not many people can even afford the money for this and many people don't have the have the space to house loads of projectors. What do you think? Would you buy this maybe 10 or 20 years down the road or would you rather stick with Virtual Reality helmets? Leave your thoughts down below.