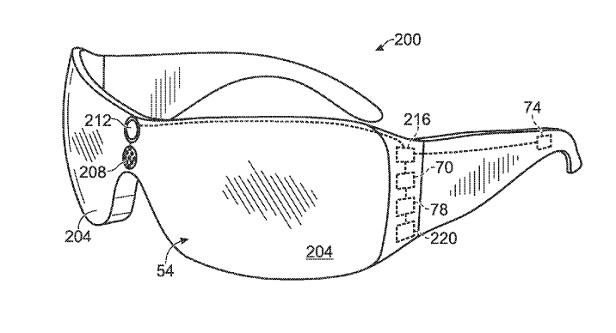 A patent, filed by Microsoft on August 1st, is suggesting the the company maybe considering the production of gaming glasses. The patent reveals Microsoft's plans for the augmented reality glasses described as,“A system and related methods for inviting a potential player to participate in a multiplayer game via a user head-mounted display device.” The glasses would combine facial recognition with voice commands, which is perfect for gaming. The blueprint / drawing above show sensors on the sides and front that could possibly track eye motion.

Users would be able to invite other players by using voice commands, and each pair of glasses would store a player profile to keep record of their games. Players could also link each other to form teams.

Microsoft's plans to develop glasses surfaced as rumors last year. A 56-page document of Microsoft's plans was leaked to the general public, but we didn't hear about the glasses again, until now.

Personally, I believe that these glasses will change the way we game today. I am looking forward to these, but I'm afraid that I may not be able to afford them. Even though the price is not released, you can make an educated guess and say they are going to be somewhat higher priced than the Google Glass, which has a expected price range of $300-$500. I am thinking that the new glasses from Microsoft are going to range from $700-$900. This is because they are an extremely successful company, and most companies that are successful tend to have prices higher than other, less successful companies.

This article will be updated as more information is released.

What do you guys think? Would you like to see Microsoft put these glasses into production? What would the price be? Let us know in the comments below.