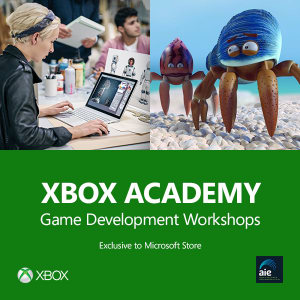 The Microsoft Store in Sydney, Australia will launch Xbox Academy this week, a series of free game development classes in collaboration with the Academy of Interactive Entertainment (AIE), a multi-national and non-profit college focusing on game development, animation, and visual effects. The move is timed in conjunction with Australia's Easter school holiday period, in an effort to encourage school-aged children to discover what the process behind game development entails, and get a taste of what career paths are available to them in the field once they graduate.

The program will feature three different courses led by AIE tutors, which cover different aspects of the game development process: Game design, game programming, and developing games on the Xbox One. Each course is intrinsically linked to a similar course taught by AIE, which allows for an obvious path for further education should attendees seek to pursue it. All workshop costs covered by the Microsoft store, and each course runs for three hours.

GameSpot recently had a chance to attend a media session where we got a taste of the contents for each course. For the duration of the class, each student is provided with a Surface Tablet for note-taking, drawing, and programming tasks, as well as a development-ready Xbox One S.

The game design course focuses on the conceptual stage of development, with the goal of equipping students with the terms and tools to be able to analyse and speak about aspects of a game's design, as well as workshop the specifics of a burgeoning game concept before even beginning to program it.

In our condensed version of the course, each student began by writing a short pitch on a game we wanted to develop. From there, the class moved between desks to provide feedback and iterate on the concepts of other students, in order to give new ideas and perspectives in terms of its themes or mechanics. We then refined our original ideas and were given guidance into how best to communicate these game ideas to different audiences, how we wanted our games to make the player feel, and think about the business side: how to best pitch a game to potential investors.

The game programming course revolved around giving students a primer on the cross-platform game engine, Unity. We were taught the basics of using Unity's graphical interface by populating a 3D world with solid planes of ground, introducing shapes and objects, and giving those objects properties that would allow them to physically interact with the world in ways we desired.

We were simultaneously shown how to write and apply basic code to these objects in a text-based scripting interface, learn how these two types of creation tools interacted, and gained some understanding to how team-based game development can work between programmers and designers. AIE representatives told us that the full, three-hour class would also cover some basic artificial intelligence application and program deployment.

The Developing Games on Xbox One course also involved learning cross-platform game programming skills, but dealt with techniques specific to coding on Microsoft's wide-reaching Universal Windows Platform, which covers PC, Xbox, Hololens, and mobile platforms. Our concise version of the course involved tinkering with a prefabricated project, learning to code variables to assign movement parameters and Xbox controller configurations to an image of Master Chief, and then deploy the final product onto an Xbox One for live testing, which was a satisfying and motivating result to see first-hand.

The emphasis is that students can easily continue to pursue the skills and programs they learn during the Xbox Academy courses at home. Unity is a free download, and every Xbox One can easily be turned into a development kit. Participants of the Xbox Academy program will be able to save any work done at the Microsoft Store onto a complimentary USB flash drive and continue working on their projects.

A Microsoft Store representative told GameSpot that they expect to teach up to 120 prospective students throughout the current holiday period, and that the Xbox Academy program is something they hope to continue hosting in future.

The current series of Xbox Academy classes will run from April 10 until April 22, 2017. Interested students can apply for Xbox Academy workshops on the Microsoft Events page.