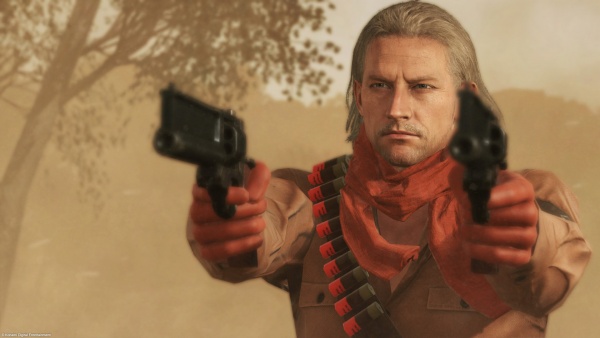 ​
A new Metal Gear Solid V: The Phantom Pain update was just revealed, and it includes quite a bit of content. Konami is adding several new outfits, new ways to use the Wormhole Generator, and Revolver Ocelot to the game's FOB mode.

The highlight of the update is the addition of Revolver Ocelot. You'll now be able to take control of the well-known MGS boss to infiltrate other players' Forward Operating Bases. According to Konami, he isn't customizable, but he does feature several perks: he has slightly better camouflage and faster reload and weapon draw times. In addition, Ocelot can dual-wield pistols and use ricochet bullets on marked enemies.

​
The update also comes with several new swimsuits for FOB staff, and they can wear them when defending your base or attacking others. Diamond Dog soldiers get two new outfits, as well, both of which increase movement speed. You can see the outfits at the bottom of this article.

Finally, the Wormhole Generator will receive new features that make it more useful. The Grade 9 Generator can now extract players automatically when they get into critical situations. They also cannot be moved after being placed, but they're harder to destroy.

Konami's blog post states that the update is slated for release around August 1. This is the first update in a long time for the game; Konami's last published patch notes are from August 2016.