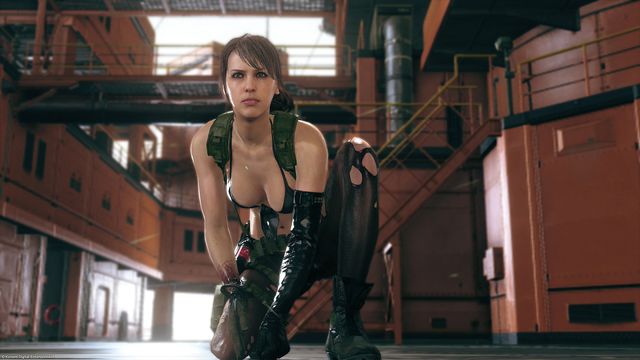 Konami released an update for Metal Gear Solid 5: The Phantom Pain today that adds new features to the game’s online competitive multiplayer mode, FOB missions, including the option to play as the sniper Quiet.

Players can now choose Quiet to infiltrate other players’ forward operating bases. In FOB missions, Quiet has extremely fast movement speed and can quickly close in on enemies with her dash move. Remaining still for a short period of time will activate her cloaking ability. Of course, Quiet is pretty good with a sniper rifle and can take long-distance shots with minimal sway, thanks to her steady hands.

Today’s update — the first for The Phantom Pain in nearly a year, when Ocelot was added as a playable character in FOB missions — also adds new weapons and gadgets to the game. Players will have the option to build a new sniper rifle, the Renov-Ickx bis, in lethal and non-lethal versions; a pair of dark matter generators that can either damage or stun enemies; and a new energy wall that creates a protective bubble shield around their character. Those new items can only be used in FOB missions.

Finally, Konami added two difficulty options to FOB missions. There is a new easy version of missions that allow players to infiltrate other bases without fear of retaliation and a “hard” version that rewards players with more event points.

Today’s update for Metal Gear Solid 5: The Phantom Pain is available for PlayStation 4, Windows PC and Xbox One.