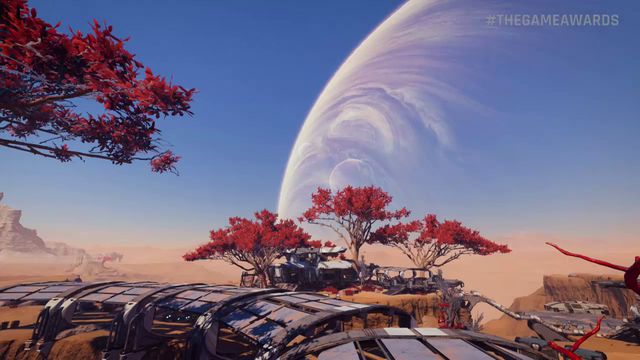 At this year’s Game Awards, we finally got to see live gameplay from Mass Effect: Andromeda. Watch the trailer to see the good ship Normandy’s crew explore the galaxy, ahead of the game’s spring 2017 release.

Aaryn Flynn of BioWare introduced the trailer by telling the audience that “making games is very, very hard.” He thanked them for their patience ahead of the video, which should make it easy for fans to forgive the development team: We got a tour through some of the most beautiful planets in the game.

“You are the Pathfinder: part explorer, part soldier, part guide,” the trailer’s narrator explains. “It's your job to find a new home for humanity. … Resources are scarce. Planets are hazardous, or outright uninhabitable.”

The trailer features the Pathfinder — known as Ryder — driving vehicles, scanning for discoveries, bickering with quest givers and getting into it with some unhappy aliens ... some of whom won’t hesitate to get a mouthful of Ryder.

Following the gameplay reveal, producer Michael Gamble teased eager Mass Effect fans on Twitter about what to look for in the trailer upon rewatch.

Last month, BioWare released a new trailer for Andromeda, albeit a brief one. That was a cinematic teaser for the game, making The Game Awards’ clip the premiere of gameplay for Andromeda.

BioWare has kept Andromeda mostly close to the vest since its reveal in 2015. Delayed from a 2016 release, the next installment in the Mass Effect franchise will be released early next year.