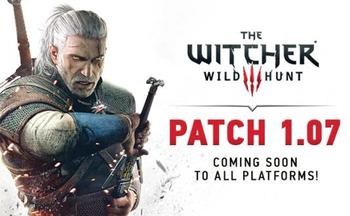 The developers of The Witcher 3: Wild Hunt, CD Project Red, just announced the contents of their upcoming Patch 1.07 in an official post on the game's forums. Big changes are about to hit the Northern Kingdoms on all platforms very soon, although they did not reveal the date yet.

When it hits, the update will make changes to your inventory and make it easier to organize your gear. More places to store loot will be found throughout the world and your inventory will be easier to sort and manage. A new tab is made for books alone, and you will be able to see whether or not you have actually read them. A nice treat is that alchemy and crafting components no longer will have any weight, so you can carry around as much flowers and goo as you would like.

Other noteworthy additions are the improvements made to horse behavior and also the "new, alternative (optional) movement response mode for Geralt." None of them are described further, but they both sound like good news.

The game has already received a few patches on both consoles and PC, alongside the releases of free DLC's. This update however, has required "all hands on deck", meaning that there will be no free content released this week.

"We hope you understand our decision. We’ve gathered so much feedback from you over the past couple of weeks and we want to implement as much of it as possible."

The list in its entirety can be found here, if you want the complete change list for the patch 1.07, you will have to wait for its release sometime later this week.

Are you happy with the job the developers have done this far? Let us know what you think in the comments below.