Looking back: Crash Bandicoot [Part 3 of 3]

Crash Bandicoot is a versatile series, this was demonstrated first, by Naughty Dogs last addition to the series, with the fan favourite (and personal favourite) “Crash Team Racing”. I have always had love for the Crash bandicoot series, but I have never loved a racing game so much in my entire life. Crash Team Racing was released in 1999 for the PlayStation 1 and while it was upsetting that it was the last instalment by “Naughty Dog”, it did open up the door for more Crash Bandicoot spin off games (Such as Crash Bash, another fantastic game). Crash Team Racing was not a game that I felt was story driven, it was the fun factor that kept me playing it, but the story was essentially that the “good guys” had to race against “Nitros Oxide” and the “bad guys” to save the planet (a massive cliché if there ever was one, minus the imaginary cartoon characters) in a “battle of the fastest”. 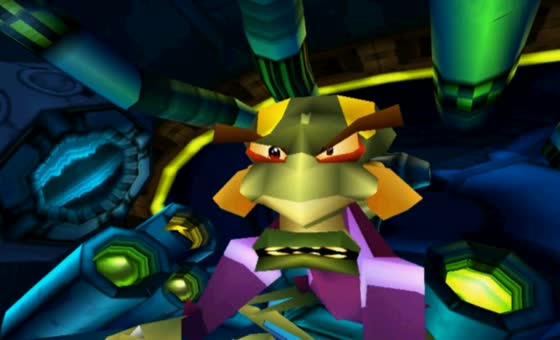 While playing through adventure mode you must win the races that are available to you so that you can unlock more races on more worlds, after winning four trophies you are given an opportunity to race against a boss (one on one). After defeating this boss you receive a “boss key” and move on to new worlds, and eventually move onto facing “Nitros Oxide” (after some other simple tasks). After you have beaten levels, you unlock new game modes. One such game mode is “Relic Race”, this type of races is completed by racing through three laps on your own, you can freeze game time by driving through “Time Crates”, and if you manage to drive through all time crates in one track, your final time is reduced by ten seconds and if you beat the time on screen, you win a Relic. Another game mode within Adventure mode, is the “CTR challenge” which involves racing normally while collecting the letters “C”, “T” and “R” within said race (very similar to SKATE from the Tony Hawk series). Collecting all three letters and coming in first place will net you a nifty “CTR Token” of a certain colour, collecting four of the same colour token will allow you to race in a “Gem Cup” of that colour which is four tracks in a row, each of which rewards points and if you win these cups you receive a gem! While that may seem somewhat complicated, it really boils down to collecting all “Trophies”, “Boss Keys”, “Relics”, “CTR Tokens” and “Gems”. Then all you need to do is beat “Nitros” and you win the game! 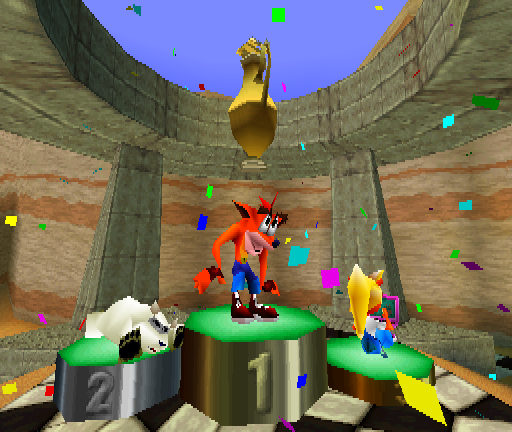 ​
Other than adventure mode there was “Time Trial” which is of course very straight forward, there was “Battle” which was extremely fun when you had friends over, of course you had to use the dreaded multi-tap (thankfully technology has advanced!). Then you had “Versus” and “Arcade”, I spent nearly all my time in these two game modes and I have to say it was time well spent. Anyone who has played this game knows that it can keep you entertained for a long time, you can enjoy it on your own or with friends and that’s what makes this game beautiful, there are less games nowadays that you can sit down with friends and thoroughly enjoy but of course CTR never had this problem.


In the game there was 8 initial characters that were divided by (apart from the good/evil division obviously) their racing style, they were either: “All-rounder”, “Top speed”, “Acceleration” or “Handling”. As you progressed through story mode (or by entering cheats, which I tended to do for the most part!) you could unlock 7 additional characters, including my two favourites in Pinstripe and Ripper Roo who are classic Crash Bandicoot villains from previous platformer titles. Being a cart racing game you can pretty much guess that there was power ups, these came from driving through crates (the crates being an iconic part of the Crash series as a whole) and then you receive a random power up. I’m not going to cover all the power ups but they ranged from TNT drops to lock on rockets or from time freezing power ups to a ball of death that would hit everything in front of you without fail. By collecting 10 “wumpa fruits” on the track you would receive a bonus of some description, which affected the crates you drove through rewarding you with far better power ups. 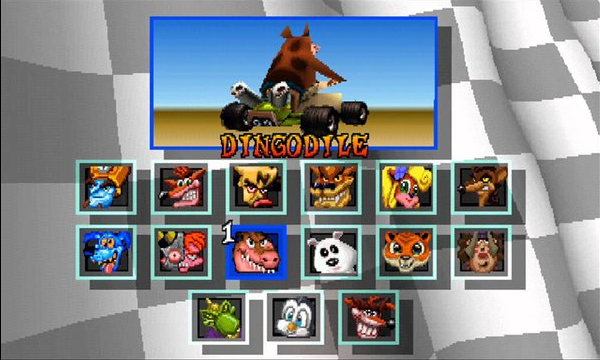 To differ from other cart games, naughty dog added a game mechanic to separate CTR from the competition. This mechanic came in the form of a speed boost which could be achieved at any time by power sliding, what made this more useful though was the fact that anyone was able to bunny hop by pressing L1/R1 and landing said bunny hop could easily result in a powerslide, which often gave players an edge and made for interesting races. Other than this the game mechanics and graphics were fairly standard, nothing spectacular but there was no issues and everything was playable with ease.


Once again, I hope you’ve enjoyed reading this and I hope it brought back some memories for those of you who love this game as much as myself, or failing that, I hope I inspired some of you who have no played it yet to do so.