Looking back: Crash Bandicoot [Part 2 of 3]

Roll on 1997 and roll on “Crash Bandicoot 2 – Cortex Strikes Back!” So, you’ve just defeated Neo Cortex and sent him flying from his ship, well what else could you possibly do next other than jump straight into the sequel to one of the best games of all time? “Crash Bandicoot 2” opens up mere minutes after the events at the end of the original game, Neo Cortex teams up with Dr. N. Gin to try and thwart Crash once and for all. After finding some very powerful crystals, he and his new accomplice create a “Cortex Vertex” powered by the crystals (which is essentially a big ugly space station with a death ray!) to try and control everyone’s minds! We jump forward one year and Cortex has captured Crash and tricks the poor Bandicoot into bringing the crystals to him. No wonder we don’t like this guy at all!

The first noticeable new feature in the sequel is your new sister, Coco Bandicoot (a playable character in the third instalment) who was brought in to replace Crash’s old girlfriend due to complaints that she was “too sexy”. The level selection screen has been totally revamped this time, now there are 5 doors, each containing one crystal and after you beat all 5 levels you move up a floor to some more challenging levels, this system is far better than the first game in my opinion. Along with that you also have a few new abilities, setting aside the fact that movement and graphics were obviously improved upon for the moment, the most important things are the new “Slide” and “Body Slam” abilities, both of which are a great way of killing enemies and boxes alike! To accommodate the body slam technique, there are new crates which require body slams to be broken.

Obviously the graphics weren’t what you’d see today, but for a game made in 1997 the graphics were quite aesthetically pleasing to all, most of the textures had improvements from the first game and the animations were also improved upon. The physics in the game were also improved upon and everything went a lot smoother. There was also the addition of the death animations (and the new enemies providing you with such!) which were interesting. My favourite addition to the Crash universe comes in the form of an enemy, “Ripper Roo” and all the other bosses were what made the game hysterical for me. 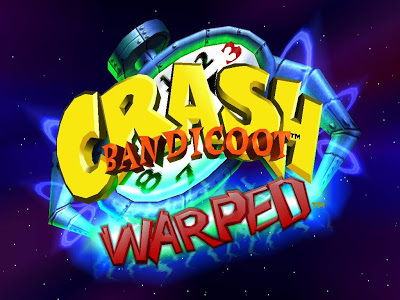 Not long after the release of this game, Naughty Dog began work on their 3rd and final platform instalment of Crash Bandicoot – “Crash Bandicoot 3: Warped!” Warped has and always will be my personal favourite out of all the Crash Bandicoot platform games, regardless of developer (although it’s quite an easy decision for the best – Naughty Dog). Warped was released in 1998 and it set such a high standard for gaming in my opinion, there was few games at the time that could contend with how good it was (one such game was “Spyro”, which you can actually access a demo to in the main menu of Warped). Warped starts right after Crash 2, it also introduces the evil mask – “Uka Uka” and as usual the plot is world domination for Cortex.

Warped introduced a lot of new things, there was a few new engines added for new level types such as the motorbike levels, the Jet Ski levels and the airplane levels, all of which added some fresh variety to this beautiful game. There was also new special abilities for Crash to unlock and utilize to access new areas or just to have some extra fun, these were:

These power ups were very useful for one main reason – replay value. Naughty Dog wanted people to get their money’s worth in this game and so they added gems, time trials, and relics to collect; some of which require you to use Crash’s new power ups. You can also access the secret level “Hot Coco” by driving into a sign in one of the motorbike levels, something which not enough games utilize but definitely should. After you obtain a set amount of relics you access a secret chamber and 5 more levels! Real shadows were added to Crash and the enemies in the game, this was quite an improvement in the graphics department. The rest of the graphics were also improved just as the gameplay mechanics were.


While “Crash Bandicoot” is an incredible game, I think that this is one of those rare occasions were the sequels are actually an improvement to the original and not just a money making re hash of the same game. “Warped” will always be one of my favourite games and I’m hoping that some of you enjoy it as much as I do. How did you guys like these games?