Limited Edition Fallout Merchandise and a 30 FPS Cap On PS4 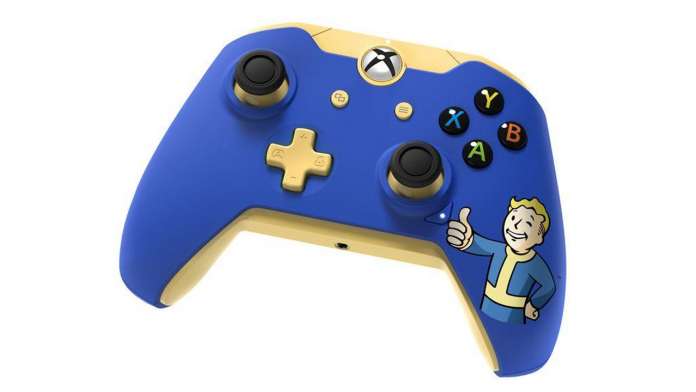 ​
Fallout 4 is only getting closer and closer as each day goes by, as Bethesda Game Studios painfully reminds fans each time they come out with another way to tease us. Today marks the start of a week where the Bethesda Store is selling limited edition Fallout merchandise, with a price reduction on many of their older items. Their store will also be releasing a new item for purchase every day this week.

Today saw the "Great War 2015" t-shirt, which will be sold as a standalone item for $16. Pre-ordering Fallout 4 before October 26 will net you this new shirt for free, but it will not be available after that date. The shirt itself is 100% cotton and will come in a heather steel-gray color. The front print will feature an iconic Brotherhood of Steel helmet, with a mini nuke emblazoned on the back of the neck with the date "10-23-2015" written underneath. The date is a reference to the Great War in the Fallout universe, which started and ended on October 23, 2077. Bethesda will not accept returns or exchanges for this shirt.

If a shirt is not enough to sate your need for Fallout gear, get ready. Tomorrow's release will feature a limited edition Xbox One controller, stylized with the "Vault Boy" theme and custom logos and icons all over the controller. The controller will also be wired instead of wireless, to the dismay of some fans. Taking the aesthetics of the controller into consideration, it may be worth picking up regardless of whether or not it is wireless. It has been stated that only 5,000 controllers have been made, so if you want to add one of these to your collection, you'll have to act fast.

​
Wednesday's release is suited more for students and people that are very mobile: a brand new messenger bag. The pack itself will be a faded green, but will sport a fancy image of a Pip Boy looking at the character's stats. The logo, as well as the straps and lining on the pack, will be in a dark, charcoal color to contrast the lighter color of the rest of the bag. This over-the-shoulder accessory will not be in limited availability like the other pieces of merchandise.

Well, would you just look at the time? We're already at Thursday's release, and you had better watch out for it! This new item will be, as you may have guessed, a new watch. The watch will come fitted with a black leather strap and a case with a silvery finish. The time is displayed in military time, and the Vault-Tec logo can clearly be seen behind the hands. Only 1,500 of these watches will be available, so if you're looking to get one, you'll have to be especially quick about it.

At the end of Bethesda's merchandise week is arguably the best addition to any fan's collection: an art book. If their previous art books are any indication of what this one will include, then you can expect never-before-seen concept art and many iterations that characters and locations in the game have gone through to get to the point they are at within Fallout 4. 5,000 art books will be available from the store starting this Friday.


​
This next bit will undoubtedly be met with mixed feedback from PlayStation 4 fans. Pete Hines, the vice president of Bethesda Softworks, has confirmed via Twitter that Fallout 4 will be capped out at 30 FPS for the PlayStation 4. After taking a look at the recommended hardware specs for PC owners, it shouldn't come as much of a surprise to see that consoles aren't able to run the game at a full framerate. As seen from the trailers shown at E3, Fallout 4 has received a visual polish not previously known to the series and as a result, it has limited how well consoles will perform while playing the game.

Bethesda knows it's fan base all too well, and on top of that, they know how to make highly appealing merchandise for their fans. With the variety they have made for fans, as well as limiting their availability, Bethesda is sure to make the most out of this week.

Credit for the material and sources goes to Pyroman and Knowledge.