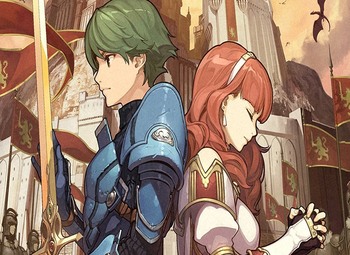 Let's talk about Fire Emblem Echoes: Shadows of Valentia. It's the first game in the Echoes sub-series and the 15th Fire Emblem game; it's also a remake of 1992's Fire Emblem Gaiden, a game that released on the Famicom exclusively in Japan. But what makes it different than the rest, and why should you give it a try? Well, let's talk about that. I'm assuming if you're reading this you're either a fan of the series, a strategy game fan, or a newcomer. If you're new to Fire Emblem, let me be the first to recommend Fates or Awakening as you entry-point. I won't be going into detail regarding that today but look forward to it in the future. This article is mostly about what to expect going into the game, not really a plot review or anything.

Fire Emblem Echoes: Shadows of Valentia follows the story of a boy named Alm and a girl named Celica. They were very close as kids but the threat of invasion causes Alm's grandfather, a retired knight, to take Celica away to somewhere safer. Alm promises to find her again someday, no matter where she's taken to. It's quickly revealed that Celica is actually a princess in hiding, and the only heir to Zofia, the country that occupies the bottom half of the continent of Valentia. The Northern half, called Rigel, appears to be invading Zofia for an unknown reason... I won't get too deep into the plot because it is a big part of the game and I'd hate to spoil it for you. It's actually pretty good and I was surprised by how much I enjoyed it.

Let's get into the important stuff; what's new. This remake features tons of returning concepts and features from long ago games as well as some completely fresh mechanics. The biggest new thing is definitely the addition of the dungeons. Dungeons takes place in a 3D environment where players have free control over Alm or Celica and can wander around. They have the freedom to explore and search for secret treasures, run around and fight enemies, or just rush right through to the end. This may not sound like a big thing - most other games have 3D movement, right? Well, yeah, but this is a big deal for strategy games, in which almost none have done anything like this. In fact the only thing I didn't like about the dungeons is how repetitive some of them can get and (especially near the end) the amount of dead-ends and enemies that appear are ridiculous.

As this game is a remake, the development team tried their hardest to stick to the source material but still make a game that felt modern, and they did a great job... Perhaps too great? Because it's such an old game, many things from newer Fire Emblem games aren't present at all. This isn't exactly a bad thing, but it results in a lot of what makes the other games replayable not being there. Things like marrying characters to get specialized children, having two units next to each other do a team-up combo attack, customizable bases (like that featured in Fates), and freedom of class are gone. The game instead uses a more classic class and fatigue system, like those of Thracia 776. Units can get tired in dungeons and will lose half of their stats of a result. You can feed them to fix this, but it's not really necessary and they don't get tired often. The class system works in a way where a unit earns the right to advance to the next class, then you visit a statue and upgrade them. You can no longer just get a seal like in previous games and upgrade any unit to any class. Not only that, but gender-specific classes return, such as women not being able to become archers and men not being able to become pegasus knights. There's also an extra chapter and more glimpses in to Alm and Celica's past, as well as the new Mila's Turnwheel, and item that lets the player undo moves by turning back time.

The core gameplay doesn't differ much from that of most other Fire Emblem games, but with some new gimicks. This time around, units can only hold one item instead of five, so you're probably going to want that to be a weapon. If you don't give them a weapon, they'll default to a terrible, generic version of whatever it is they use. Skills and magic work differently here, too. Instead of skills learned by class, they're learned by weapon. Each weapon teaches different skills. They're also not automatically activated at random like in other FE games, you chose to activate them at the cost of HP. This is a neat idea, except for the fact that most of your standard attacks are going to be more powerful than skills anyways... Magic works the same way as well, where you sacrifice HP for power. The more powerful the spell, the more HP it costs.

This is an absolutely great game if you love Fire Emblem or even strategy games in general. It's not the most replayable game in the series but it is what it is. I really think SOV stands as a testament to what the next FE could be; a fusion of SOV and Fates... And finally, fun fact: the continent of Valm in Fire Emblem Awakening is actually the future version of Valentia, after they had renamed it after Alm.

Have you played Shadows of Valentia? Gaiden? Are you going to? Let us know in the comments!
About author