Hello everybody, it's the end of another week, and so it's time for another look at some great games. But today, instead of focusing of one underrated game, I am looking at a full console, with this article being on the Infamous Nintendo GameCube. It's easily one of my favorites, and you can actually get many of the consoles them selves for cheap. That is, if you did not already have one. You monster.

Many look at the GameCube as a "Kids" console, but I have to respectfully disagree with those people. Of course it has it's fair share of Nintendo exclusives, like Mario Kart: Double Dash! and Metroid: Prime, but there are many others, like Metal Gear Solid: The Twin Snakes. It also has a lot of variety in those said games, from RPG's, to FPS's. Anyways, let's get started.

First off, the console itself. The GameCube's design is probably the most portable that I have seen out of a console. It's not that heavy, and even has a handle on the back for carrying. It's extremely easy to move it to one television to another, and it does not even have a lot of cords. The front of the console is where you plug in the controllers, and what's good about the controller ports on the GameCube, is that you do not need an adapter, like for some of the other consoles at the time. There is no hassle; just plug in and play. One of the biggest downsides of the GameCube, however, is the lack of a Hard-Drive. You will need a memory card to save your progress, but not to worry, because most of the games you can buy actually come with a free one.

​
The top is where the magic happens. It has three main buttons, Reset, Power, and Eject. All of these do what they should do, unless your an idiot like me, who accidentally pushed in the power button too far one day. When you press the eject button, it opens the top up to reveal the disk slot. What's to note, is that the GameCube uses much smaller disks then the Xbox or PS2, so you will be have to be careful, as they tend to crack if you just throw them around. I've broken my fair share of games this way, so I would always keep your disks inside their respective cases so they don't break.

The big reason Nintendo chose to make the disks 3", was to combat piracy, a lot like how the N64 stayed with cartridges instead of going disk-based. But all-in-all, the GameCube's design is flawless, and I have yet to encounter a console with one better than it.

If you are a true gamer, then you probably know that the controller can make or break the console, but no worries with the GameCube. The controller fits perfectly into practically anybody's hands, big or small. The triggers have rounded grooves in them, which feels very smooth on your fingers, unlike the Xbox at the time, which had very jaggy ones. It's a lot better then the N64 controller, and the only thing that I really do not like about it it the buttons. They take some time to get used to, especially if you just finished a round of Halo. 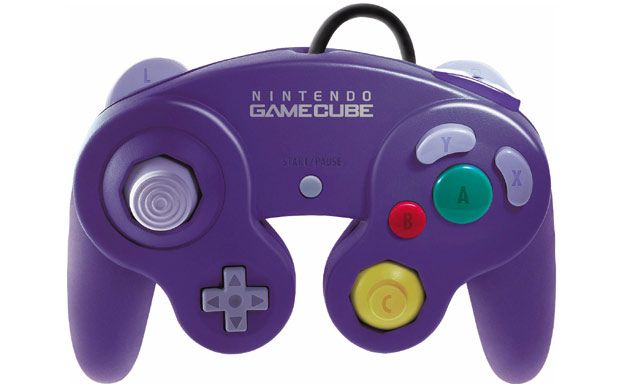 A large photo of the original violet-coloured controller.​
And it all comes down to one thing: the games, and how they perform. While the Xbox and PS2 may outshine in the graphics department, they have very long load times, like the mission loading screen in Halo 2. The GameCube, however, has virtually no load times at all! And when it does, it takes mere seconds. Graphic-Wise, it's nothing to sneeze at, but they still look good to me even to this day. The GameCube is also praised because of how many out-standing games and franchises. Super Smash Bros. Brawl, 007 Nightfire, Super Mario Sunshine, Pikmin, Mario Party 4-7, and so many more games have the GameCube as their home console. What's also awesome, is that a whole lot of the games that you can find on other consoles at the time also have versions on the GameCube, so you definitely have a ton of games.

Overall, you should have a GameCube. Nintendo is known for making good, dependable hardware, and this console is a prime example. While minor issues like no online without an adapter and no hard drive may make some worry, it will make up for it with the fun you will have with it. It's anything a kick-back gamer could ever want, and it even has one of the coolest accessories, the Gameboy Player. It's a device that attaches to the bottom of the console that allows you to play any GB, GBC, or GBA game right on your TV. That's right, full screen Pokémon Red. And with countless A+ titles on it, like TLOZ: The Wind Waker, it's definitely worth it, especially since you can snag one in good condition for about 30$ now.

Anyways, thanks for reading as always. I remember the days of 4-player Smash Bros. Melee...