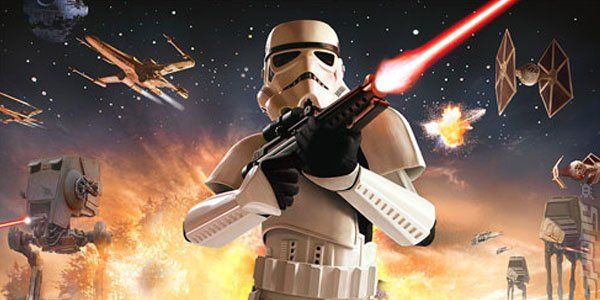 Seeing that EA, (Electronic Arts) has recently confirmed a sequel to one of my favorite Star Wars games, I find it is only fair that I talk about the first one in the series, Star Wars Battlefront. Now, this game is a First Person/Third Person shooter hybrid, allowing you to play it like Call Of Duty, or as an over the shoulder view like in Mass Effect.​
The gameplay is simple, yet intuitive. On each map there are control posts, which you capture to earn points, a lot like domination in other shooters. The maps are also surprisingly big, and there are even vehicles from the movies like the AT-ST that you can use. My favourite map is "Hoth", which is very open and has lots of tunnels and outposts around the map. There are two teams, and depending on the map, they can be the republic versus the sith, or the rebels against the galactic empire.

The main problem that I had with this game is the A.I, which will kill enemies, but never help you at all when capping posts, or giving you health. But, this is the Xbox, so it is mildly excusable. The gameplay is always fresh, even when playing in long sessions. There are four basic modes to chose from: Campaign, Galactic Conquest, Instant Action and multi-player. The campaign just takes you through some iconic Star Wars missions, it's nothing special. Galactic Conquest adds a bit of strategy to the game, making you want to fight in locations that will give you the most points. Instant Action really explains itself, it is a skirmish mode in which you can fight on any map against A.I opponents. multi-player is like any other matchmaking component. Something I should also mention is that you can play as a Jedi or a Sith Lord if you get enough points in a single game.

The game is actually pretty good in the graphics area, there is almost no lag even with the very large maps. Now, there are classes in this game, but they are a little different then your average COD classes. There are always basic kits available, like the sniper and engineer. But, if you do well enough in the game, you will unlock special kits like the droideka, that can roll around the map. This is a very well-done mechanic, since it rewards you for playing well. The game is still very balanced, and there are no overpowered classes either.

Overall, this game is probably the most under-rated shooter of all time. It controls fluently, the class system is amazing, and always has fresh gameplay. As an added bonus, you can also play as darth vader and force choke people. Enough has been said about this amazing game, and I highly suggest checking it out if you have never played it before.

Want me to look at the second game? Send me a message on my account page. I will always listen to your ideas, as long as multiple people agree with you. I will do any game, from platformers to shoot em' up's to indie games. Thank you for reading, and have an amazing day.

May the force be with you.