Hello to you all! The week closes off yet again, and so it pleases me to do another review. After my previous review on the awesome gore-fest that was Brutal Doom, I decided to take it down a notch to my favourite Pokémon game, Pokémon FireRed for the Game Boy Advance. Now, I am not saying that I hate the old version, I just think it's better in every single way than the Original. The GBA truly showed its capabilities with this title, and was a very good game. For those of you who do not know, FireRed is a remake of the original Pokémon game on the GB/GBC.

Porting the game to the GBA was a brilliant idea from Nintendo. Not only did they make everything better about an already great game, they added new, fresh ideas too. These ideas definitely made the game even sweeter than the last one. The first thing I will touch on is the graphics. This is probably the weakest area of the game right here, using colours and designs that we already have really seen at this point and time with Ruby/Sapphire. They are not bad, by any means, and the new sprites look awesome, it's just that many people thought they could make them even better. Nevertheless, they are still extremely good.

However, if you are a true gamer like me, then you will probably agree that it's not about the graphics; it's about the gameplay. Well, this game definitely delivers in that department. Some people criticize that Pokémon is "too repetitive", but FireRed adds so much more that you can tell it apart from some of the other Pokémon games out at the time. All the Pokémon games have turn-based combat featuring creatures that humans live with, called "Pokémon." When you enter a wild or trainer battle, your main objective is to basically knock the opponents Pokémon HP down to 0, by using moves. It's simple yet fun, and it never gets old. You can also catch new Pokémon by using Pokéballs, a device that is used to catch wild Pokémon. It sounds repetitive, however the amount of Pokémon to see and catch is pretty big. So, especially if you are a new player, it's a fun surprise to see what kinds of different Pokémon you can catch.

​
In terms of presentation, it does not offer a lot of new features, apart from those added in Ruby/Sapphire. I would of liked some cool new features exclusive to this version, but sadly, it's very limited in that area. Now, this by all means does not make FireRed a bad game. Its story is well done, allowing for over 30 hours of play, and not to mention, all the fun you can have battling friends via the Gameboy link cable. As with all of my reviews, I won't give out any plot structure because I want you to try the game yourself. The music has also gotten a big upgrade, although they did not add any new tracks. The lack of new tracks is sort of disappointing, because the themes in Pokémon are kick-***. The sounds have also gotten a fresh tuning, allowing them to be GBA quality. And then of course, there are the Pokémon themselves. And holy cow, they look awesome. Every single one has a new, colourful and awesome 32-bit sprite that is pure eye-candy.

The improved elite four sprites.​
I think it's safe to say that I like the new sprites much more than the classics. The battle animations for the different moves also have been upgraded, so that more pixels can be used. Your main objective however, is the same from all the games before FireRed. You try to become the best Pokémon trainer in the world by completing the Pokédex, beating the eight gym leaders, and finally, overcoming the elite four and toppling the Pokémon champion. It's a lengthy process, but it all pays out in the end.

While we are at it, let's talk about the trainer named "Blue." During the game, Blue acts as your rival, continuously taunting and battling you throughout the whole game. In fact, at the very beginning of your adventure, Professor Oak even says that you were rivals since you were babies. He's always ahead of you, by the Pokédex and Pokémon alike. He takes the Pokémon that are super effective against yours at the beginning, and even tells his sister not to give a MAP to you. Harsh. While he's not the main villain or antagonist of the game, he definitely feels like one, and I don't think that they make video game characters as good as him anymore. While there are other rivals in the Pokémon games now, like Silver, none of them can topple Blue. He will probably remain my favourite rival in a video game for a long, long time. 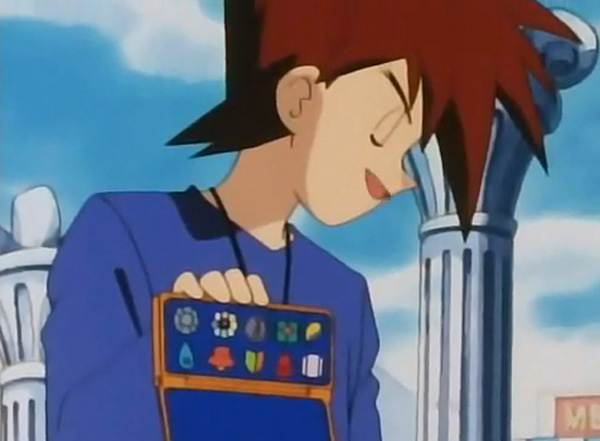 He's always one step ahead of you.
​
Pokémon FireRed is, in one word: Awesome. Not only did they take everything about the original and make it better, they added a small amount of new features too (though they could have used more). As I said on my Brutal Doom review, it's like playing through it again, but with different seasonings and spices. Nintendo outdid themselves with this one, and it should be honoured in any ROM, or GBA collection. It's a must-have for pretty much any Pokémon gamer like me. And with that, the nostalgia train stops. Thanks for reading as always, fellow sinners!