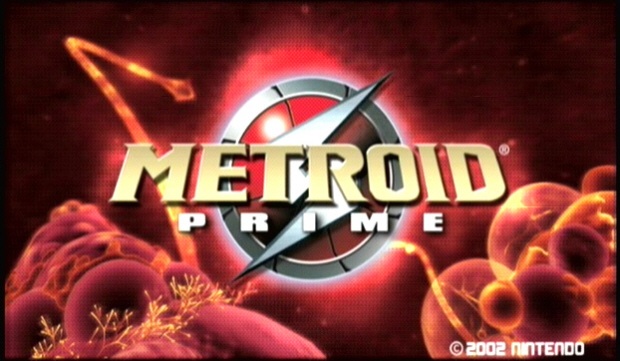 An image of the title screen.
​
One thing that the Metroid games have always done very well is the feeling of isolation when you play. Ever since the series debut on the Nintendo Entertainment System, you always felt alone in every room and corridor. This could be said exactly the same for Metroid Prime, the first 3D game in the series. After hiding in the shadows of the Nintendo 64's lifespan, the entry to 3D is a very well made one, and Prime easily shows the power and might that the GameCube had in the console market. Friends, welcome to the world of Metroid.

Ever since the original on the NES, I have always been a very big fan of the Metroid games. They have always appealed to me very well, mainly because of the already mentioned feeling of isolation. You have no other people to escort or fight with, you are just by yourself. In the end, it pretty much sacrifices character development for atmosphere, which seems like a bad trade-off at first. But for the kind of game Metroid is, it does not even bother me that much.

As in all of the past games, you play as Samus Aran, a female bounty hunter whose parents were killed by Ridley. You don't get a whole lot of other story in this game however, and it kind of just throws you in. In fact, the only real information you get story-wise is from text on the screen before you actually play the game. It's an area that the series could definitely improve on significantly.

Being the first 3D entry in the series, the game plays a lot different than it's side-scrolling predessesors. It keeps the flavour from the previous games however, and it feels just like the original. It did bring in two new mechanics of its own though: Scanning and Lock-on. Both of these are implemented well, and it did not bother me. In fact, they seemed to add even more immersiveness. When you scan something in Metroid Prime, it adds that object or enemy to a large database that you can look at at any time. Think of it as an encyclopedia, except you are writing one instead of reading one. As you go on, you collect tons of things to add into the encyclopedia, and it provides you with lots of info on many different things. Lock-on, is pretty much like z-targeting. You lock on to the enemy that you are shooting at, and you can fire in it continuously without having to aim. 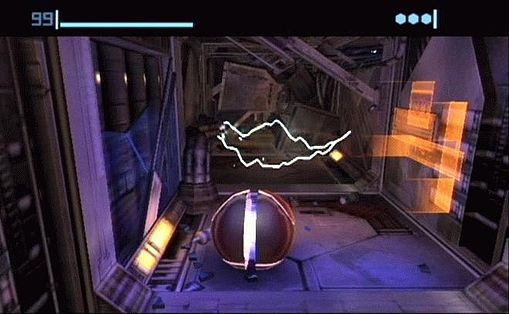 ​
Of course, there is also Samus' famous morph ball ability, that allows her to get into hard-to-reach places. In functions exactly the same in Prime, having a third-person perspective. It's a key to many of the puzzles found in the game however I don't feel like it was used as often as it should of been. Incorporating the morph ball into certain boss battles would also be nice, as again it is not used as often as it should be used. It still looks very cool however, and going down a shaft in the morph ball looks even cooler from the third-person perspective.

Sound-wise, the game excels. From the awesome menu theme, to the scanning sound, the game is excellent in this region. Everything you hear sounds polished and some of the enemies are done exceptionally well. It's a big, big step up from the original, and I like to listen to the ambience sometimes while playing.

The graphics may not be too pretty by today's standards, but you can tell that Nintendo pushed the system to its limits while making this game. The enemies all look very detailed, and the environments also look rather nice. Samus' suit also has a very big level of depth added to it, and it looks amazing. Even though the suit looks a little different, the way it was changes and how it was changed made me love it even more than the original design on the NES.

Exploration has been a huge part of the series, and it is usually required. But in the Metroid games, you have to backtrack a ton to move on, and it's a blemish on the series. Having to go back to an area to find that one upgrade gets annoying as hell, and it's unfortunate that this game suffers from it like the past entries in the series. For some areas you actually need to get a new upgrade to pass, and it just makes you go back and look for it. Trust me Nintendo, we don't like that.

Metroid Prime was awarded as the best GameCube game for a reason. It's stunning levels of gameplay and atmosphere are a joy to even look or listen at, and it's easily the best entry in the series. If you have not played it, then I would suggest looking at some gameplay on YouTube, as even just that will get you hooked.