Hello everyone, it's the end of the week yet again, and so it's time for another review. (Oh, and Happy Easter!)

Today, however, I decided to review something that does not get enough attention that it deserves. Ladies and Gentlemen, I present to you: FTL: Faster Than Light. If you are into adventure games, then boy, is this a treat. The basic concept of FTL is simple. In the future, people are way into space travel. Six main races dominate the land: the Humans, Slugs, Rocks, Engi, Zoltan and the Mantis. However, a extremely Large group of Rebels are trying to take over control of the Federation, the faction you are trying to get to throughout the course of the game.

You travel across sectors and nebulas to tell the General of the Federation fleet about the Rebel flagship, the weakness in their overpowering fleet. One thing that FTL sets it apart from games like it, however, is the different choices you can make. Do you want to steal supplies from the Pirate base or just destroy it? It's a different game every time, which makes it addicting. I guarantee you will come back to it often. You can also choose to use different ships, after unlocking them. You start out with the Kestrel crusier, but you can unlock more by completing certain objectives or by beating the game with the last ship you unlocked. It adds a whole lot of variety in the gameplay, as each ship has a certain play-style. Take the Engi crusier for example. Instead of having laser and missile weaponry, it focuses on deploying drones (More on those later.) and Ion weapons. 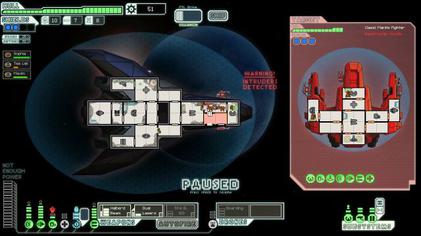 The gameplay is simply amazing, and there is a lot to talk about. First off, you will die...a lot.

Yes, it's almost like Dark Souls. The game is extremely difficult, but yet again, in a very good way. Sure, you can be destroyed by a boarding party on your first jump, but you keep trying again and again, allowing for some great moments. One time, I found a Chain Vulcan floating in space! On another run, I was destroyed by a boarding party when I had 7 crew members. Like I said before, it's a different game every time, and it works extremely well for the kind of game FTL is.

Your HUD has very useful info, such as your O2 levels and dodge-chance. On the bottom left of the HUD is your power supply, which is used to power your ship's weapons, medbay, engines, shields and your oxygen supply. These systems can be upgraded using scrap, FTL's currency. But at the same time, you will also need to upgrade your ships reactor, which gives you more power. You can even power down some systems to get more power in another. Your supplies are separated into three main groups: Fuel, Missiles and Drone Parts. Fuel is consumed by one for every FTL jump you make. Missiles are pretty self explanatory: they give ammo to the missile-based weapons you may have equipped on your ship. Drone Parts are used by drones that you can deploy. You will need to buy a Drone Control System from the shop first. They come in many different kinds: Anti-Ship, Laser, Beam and even boarding drones that rip the enemy ship apart.

Combat is something FTL does right, yet again. Your weapons have to recharge for every blast or burst you make. You can target any system on the enemy ship, allowing for some true strategy. Should you take out their engines so you can get a higher chance of hitting the enemy ship or should you take out their shields, making them helpless? When your ship takes damage, you can send a crew member to repair it. What's nice here is, again, the strategy. Engi can repair faster then any other race, but the Zoltans and Mantis struggle, repairing at only half speed. It's the best gameplay I have seen since KOTOR, pure and simple. The graphics are also nice, and the colours and detail are outstanding.

Music? Check. It has so many badass techno themes that just make you feel good. It's easily the best I have ever heard in an Indie Game.


Skip to the middle of the video, you will not regret it.​

FTL is truly a remarkable game. It has anything a gamer could want: Graphics, Gameplay, Sound and Music, all of it adds to the atmosphere and makes it truly worth a 10/10. That all said, a free DLC was released which added even more content! FTL earns my must-play of the month badge, and is available on Steam and iOS devices for around 10$. And with that, I close off. Have a wonderful Easter everyone!