​
Hello everyone, it's time for another look at some great, underrated games, and today I will be reviewing the popular racing game on the Xbox One, Forza Motorsport 5. (Forza 5 for short.)

When it comes to racing games, I'm a pretty big fan of them, especially the ones that I grew up with, like Burnout and Grand Turismo. I don't really think they get the attention they deserve, and people usually turn away from games like them because of repetitive gameplay. But hold on to your butts, because Forza 5 is definitely much more than that. The very first thing that you will notice, when playing the tutorial race, is how beautiful this game looks. All the environments feel very realistic, and the colours are pretty good too. The inside of each car is very well detailed, to small things like the speedometer and the mirror. It makes the game full of life, and in a very good way. While previous games did not really focus in the graphics department, Forza 5 definitely delivers, showing us the true power of the Xbox One. All of the maps are also usually famous ones, like Laguna-Seca or even the Swiss Alps. All of them have a lot of detail and effort put into them, from small things like skid marks on the track, to big things like mountains off in the distance. The damage on your car is also very well done. Paint scratches off, your hood breaks, your spoiler flys off, your windshield cracks, these are just some of the small things that I really enjoy. 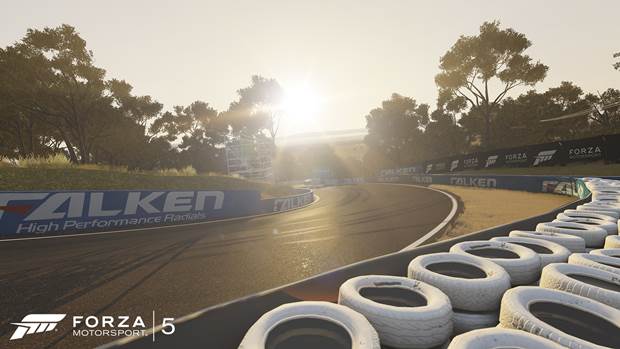 A screenshot that perfectly shows the detail put into the environments.​
One of the games biggest new features is Drivatars. The main concept is simple: After a couple races, your Drivatar will learn everything about how you play the game. How you drift, your driving style, and a whole lot more. Your Drivatar then races for you when you are not online, earning you extra credits and experience. It's executed very well, and is one feature that you don't want to miss out on.

Sound is also very important in a racing game, and Forza 5 delivers that well too. The sound of crashing into a wall, the car itself and other sounds are all well implemented into the game. It adds a whole new layer of depth, again making it more realistic. You won't hear music often, and never in game. The only bits of music are on the main menu, which is disappointing. Forza Horizon had a very well done radio system, and I really wish that they implemented that into the game. Also in sound, is the announcer. If you don't like British accents, then it sucks to be you, because guess what? He's British. And talks about cars. Boy, there are a lot of them. You can buy any car from pretty much any manufacturer, to Ford, Mecrcedes-Benz, and even Buggati and Ferrari. Plus, with cheap DLC coming out often, you can add even more variety, like the IGN car pack that you can buy. Forza 5 also has the upgrade system from the previous games in the series, with even more small things touched up on it to be very easy to use. Basically, you can upgrade your car to suit any racing style, like off-road. These upgrades cost credits, which are earned by winning online and local races.

Control-wise, it plays astonishingly well. It makes full use of the Xbox One's impulse triggers, allowing you to feel when you are braking or accelerating. It's a small thing, but again, it makes an already realistic game feel more realistic, and in a very good way. It has the basic controls of your average racing game, right trigger to speed up, left trigger for the brakes, and the left control stick to steer. It's very fluid, and at 60fps, it's pure bliss.

To sum it all up, Forza 5 has anything you would want from a next-gen racing title. It's graphics, gameplay, and sound combine to make it a very realistic and fun game. While it suffers from some repetitive gameplay, and not a whole lot of new features, it is still one of the best Xbox One titles out right now. I suggest you at least give it a rental, to see if you would enjoy it or not.

Anyways, thanks for taking your time to read my article, but I need to state something first. Don't worry, I'm not asking for views/likes. I made two articles in two days to make up for my lack of effort in my discontinued series of articles on the Mario games. I will be delivering another article next week, on Monday. I just wanted to clear that up, and thanks for reading!