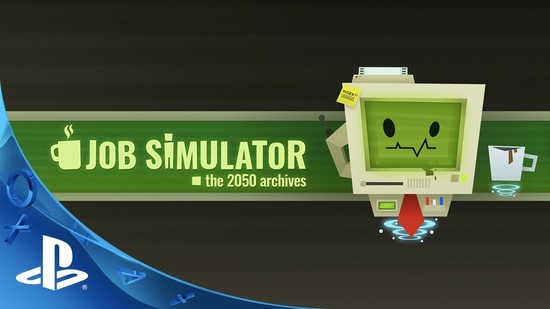 One of the more wacky, albeit strikingly realistic games that was announced during the PlayStation Experience event this weekend was for a simulator which is set thirty-five years into the future. Simulation games such as this one have become increasingly popular over the past several years, and the thorough attention to detail in Job Simulator may just up the ante to a level that has not been reached before by previous developers.

In Job Simulator we will be travel to the year 2050, to a time when robots have taken over all human jobs throughout society. During this time of technological achievement, the Job Simulator was created to provide humans the nostalgia of working a normal 9 to 5, and doing it however they seem fit. Participants of the simulator can experience what it would be like to have a career as a gourmet chef, and even as a simple office worker or convenience store clerk. But do not fret, this game will not be a monotonous flow of never-ending orders to fill or deadlines to meet. Instead, it will be a breath of fresh air to the entire gaming community, giving players an endless amount of possible actions that will make them feel as if they are truly moving around in the workspace of the job they’re performing. Office worker, convenience store clerk, and gourmet chef are just three of the five jobs that will be featured initially when the game first launches. If the game turns out to be successful, it can be assumed that more job positions will be produced by the developers.

The PlayStation Camera and dual PS Move Controllers are two key components that pave the way for completely fluid interaction with the in-game environments. Players will be able to go about their workday as they please, whether it includes drowning a raw steak in an entire bottle of sriracha sauce, or juggling coffee mugs after making a duplicate copy of your stapler. In between all your humorous antics there will presumably be the option to fulfill the tasks of whichever role you're currently simulating. The developers have precisely tuned the motion detection in Job Simulator and have revolved it around your hands so that every movement will feel as if it were really happening. These actions will in turn provide the player countless hours of hilarious fun throwing stuff around for no reason as they randomly execute absurd hijinks.

When combining realistic physics and split-second reactions to the user’s movements, the gameplay, mechanics, and fps of the game needed to all be at peak performance, but also needed to function effortlessly alongside each other. Because of this, the developers of Job Simulator have devoted their attention to optimize further than they ever thought possible, pushing the game’s fps from the industry standard of sixty, to a whopping ninety frames per second.

Job Simulator is now confirmed for release onto PlayStation VR, but will also be coming to the HTC Vive and Oculus Touch. However, the exact date we can expect a launch is not yet known. The CEO of Owlchemy Labs also revealed that they have something special planned for PlayStation fans, and will be announcing more information regarding it soon.