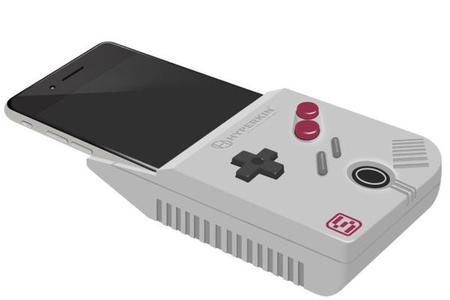 Hyperkin manufactures various accessories for almost every gaming device out there, but what they are most well known for is their emulation consoles. On March 30th, a Hyperkin employee “leaked” photos of an upcoming emulation device, the Smart Boy. Due to the timing of the leak, many speculated that this was an April Fools joke, but it may not be a complete joke after all.

The leaked photo showed that the Smart Boy will be able to turn a iPhone 6 Plus into a fully functioning Game Boy. The device has a button layout very similar to the original Gameboy and also features a slot for game cartridges. It can then be slid over an iPhone, presumably pull the ROMs from the cartridge, and use the phone to emulate the game.

When it was initially leaked, a lot of gamers assumed it was an April Fool’s joke. However, shortly after the leak, Hyperkin made the following post on their Facebook. “A lot of you were speculating that the Smart Boy is an April Fools' Joke. Well, it sort of was. We "leaked" it with the initial intent of testing the market, seeing whether or not it should be something we'd actually make, under the guise of an April Fools' Joke.”

There are still a lot of unanswered questions about the device. First off, the leaked photo only shows the Smart Boy working with an iPhone and not an Android. Apple is known for not liking emulators on the App Store, and it’s doubtful Hyperkin will be able to change Apple’s minds. An even bigger concern is how Nintendo will react to this device. Nintendo is known for tightly enforcing copyright infringements and it doesn’t look like Hyperkin could easily avoid them. While Hyperkin hasn’t ran into any issues with their emulators of TV consoles, the fact that Nintendo already has patents for Game Boy emulation is a bit discouraging. Regardless, it will be interesting to follow the development of the Smart Boy and hopefully we can get it one way or another.
About author