Hype Error Report: Firewatch and No Man's Sky Most Hyped of the Year 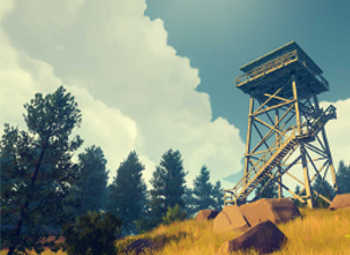 The hype – have you fallen for it? According to Steam analytics system Steam Spy, Firewatch and No Man’s Sky rank among the most hyped games of the year to date. That’s the headline, anyway. Hype in this case is the difference between launch day players and players two weeks later. The implication is that the bigger the drop, the bigger the failure. That couldn't be more wrong.

Steam Spy looks at launch day and sees how many people are playing a given game. That’s data point number one. Then it looks again in 14 days and sees how many people are playing. It considers a big drop to be caused by “hype” – getting everyone psyched up for launch day and then measuring their disappointment by the fact that they’re not still playing two weeks later.

In the case of No Man’s Sky, it launched with over 163,000 people playing it on launch day… pretty impressive. Two weeks later, Steam Spy found only 17,000 people playing. That’s about a 90% drop. Not a good sign for a game of such epic scale and grandiose pre-release promotion.

Meanwhile, indie game Firewatch launched with about 12,500 people playing. Two weeks later, only 1,277 people were playing. That’s another drop of around 90%. But does it mean the same thing?

Comparing numbers to numbers is usually a good way to judge game objectively, but in this case, it doesn’t work. Why not? Because of the two games being measured.

No Man’s Sky famously boasts 18 quintillion unique planets to visit, all of them realistically planet-sized. In other words, the game is huge. It's incomprehensibly vast. Players should be able to play and keep playing for years on end. But No Man’s Sky has met with mixed opinions and gotten reviews full of confusion and disappointment. Se7enSins' own review described some of these conflicting feelings.

Meanwhile, Firewatch is an intentionally slow-paced indie game about a forest ranger alone in the woods. There’s no action, just exploration and dialogue. It’s also very small. It can be played from start to finish in a handful of hours. Most people who picked it up on launch day probably finished it in one or two sittings (I know I did). Therefore, the people playing it two weeks later probably aren’t the same people who bought it on day one.

And that’s the problem with this hype metric: it doesn’t account for the scale of the game. Both games are memorable, but for different reasons. Firewatch has almost zero replayability, but was an intriguing little adventure, told through found notes and a walkie-talkie. No Man’s Sky presented you with an amazing, seemingly endless universe to explore, but many players and reviewers found it somewhat empty and repetitive. You could play it forever, but do you want to?

No Man’s Sky was immense and created with sophisticated algorithms; Firewatch was tiny and hand-made by a handful of artists and writers. These numbers from Steam Spy further prove that you can’t always trust the algorithms.