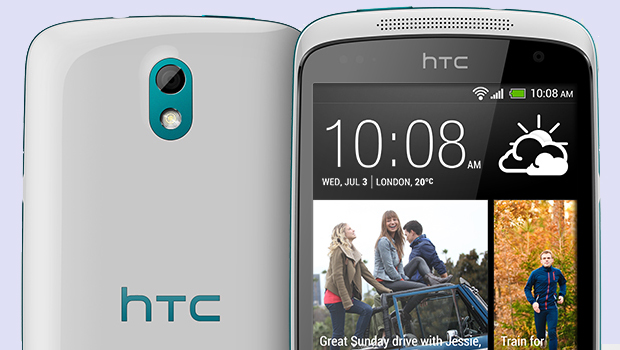 The Desire 500 is a mid-range phone from HTC, it’s perfect for anyone with a tight budget but still wants a relatively good phone. The Desire has a somewhat unique design, in that it is mostly curved and the standard colour scheme is white and baby blue, which is a nice looking combination and works well with the phone.

I have had the Desire for a month now and it has not let me down once, it does everything I need it to do very well with no hassle. It has a 4.3” WVGA display with 800x480 pixels. The display is very good for the price and there have been no problems so far. It runs on a Qualcomm Snapdragon 200, 1.2GHz quad core with Android version 4.1.2 (Jellybean) and 1GB of RAM and 4GB internal memory. These specs are mid-range of course, but for the price of the phone (average of 200$) they are impressive.

The Desire 500 also has an 8MP camera, which impressed me since the quality of images is very good, and a 1.6MP front camera (which was still impressive to me since I've never had a device with a front camera!). A basic set-up, but you aren't going to be buying an Android smartphone for your photography needs, so it’s a nice bonus.

When it comes to using the phones features, I find that the integrated home screen has the potential to be very useful if you follow certain things, but it can be annoying being flooded with updates from the many sources you choose to follow. There is also the fact that other than the standard home screen, you only have two possible tabs for any shortcuts you want on your “other” home screen (you can still put as many as you want in the apps screen). There is the integrated weather widget alongside the clock on the home screen (and app screen) that is useful but can drain power. The phones pull down menu is unlike any phone I've used before, I'm not sure if this is HTC in general but the pull down menu only contains 2 options; “Power Saver” which I recommend you leave on, and “settings” which you will use to turn on Wi-Fi as well as use your other settings, this surprised me as I had grown accustomed to seeing my Wi-Fi or data roaming options directly in the pull down menu.

The phones physical characteristics are pretty standard, the three complaints I have about it are quite trivial, the first is that the lock button is a bit small and therefore hard to press, which is annoying since it’s the only way to wake up the phone. The second is that the “home” button is integrated into the rest of the touch screen, so screen shots are harder to get and in some cases impossible (Snapchat), and the final one is that the volume buttons are hard to find without looking straight at them. It only weighs 123 grams so it’s easy to carry around.


All in all I am very happy with the HTC Desire 500, I think it’s a very affordable, durable and interesting phone, I'm not the type of person to spend big money on the newest HTC One or the New Samsung Galaxy, but a phone similar to them for a fraction of the price was very appealing to me. It has given me no problems so far and I don’t see it giving me any in the future, if I were to rate it out of 10 I would give it a 7/10, I would have given it an 8 but the lock button annoys me.