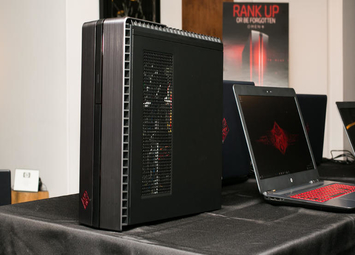 Yesterday, HP launched its new "Omen" line of gaming desktops, laptops, and accessories. HP claims that this line of products will cater to gamers of every budget, with options ranging from cheap laptops all the way up to high end desktops. They also claim that this line is geared towards VR gaming, meaning that even the base products should be able to play VR titles well.

At the time of launch we only know of four products: two laptops, a desktop and a monitor. But HP says that they will be adding many more products to the line as time goes by.

The desktop and monitor will be available sometime in August of this year. Specs have not yet been released for the desktop, however, but it's safe to assume that it will be both powerful and expensive. The monitor is called the HP 32 Display, which boasts a quad HD display, five millisecond response time and 75Hz refresh rate. Pricing is currently unavailable for both of these products, though.

Hopefully we will see good things come out of this new lineup from HP. Perhaps they will learn from brands like Alienware and understand that gamers have figured out how easy and cheap it can be to build your own PC these days and keep these products reasonably priced so as to compete, instead of trying to sell some brand name for easy money.

Lumos
I read books and listen to Sublime. Trippy life, happy life. I enjoy turning my thoughts into words and putting them on paper.